Winter Storm Chris To Drop Up To 18″- Precedes Snow Moon 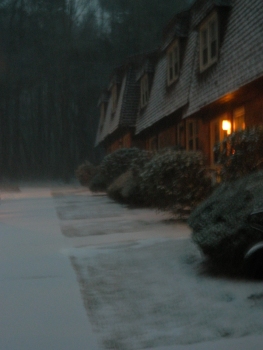 Anyone who thought Connecticut might escape the winter of 2017 without a major snowstorm was wrong. A so-called “nor’easter” named Winter Storm Chris is upon us and is expected to drop between 10 to 18 inches across the state by nightfall.

Snow got underway around 6 a.m. this morning in suburbs just outside of Hartford. An hour later, what had been a gentle coating showed rapid accumulation.

Gov. Dannel Malloy had already partially opened State Emergency Operations then provided an update at a 9 a.m. televised press conference. As of last report to him, Malloy said Connecticut State Police had responded to 200 calls and of those 30 were accidents, a few had minor injuries but none involved fatalities. The state has some 634 plow trucks on tap and 700 National Guard men and women who stand ready to help if necessary, Malloy said. Municipalities as well have their own trucks, plus contractors. On Wednesday Malloy had put 1st and 2nd shift non essential state employees on notice not to report for work Thursday, January 9. He noted some other large employers followed suit.

“I think everyone did the right thing,” he added.

That will likely keep high numbers of travelers off the roads, Malloy said. However, stores like delis and convenience stores have remained opened, he noted. The governor said too he is keeping in touch with surrounding states – so far none have closed roads. Heavy snow is expected to taper off around 2 p.m. 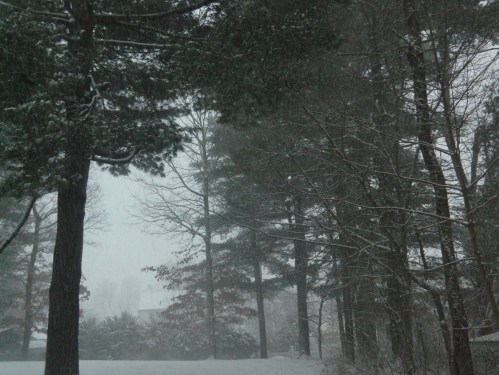 By 7:00 a.m the sky remained misty and rapid snowfall was accumulating.

Eversource and United Illuminating, Connecticut’s two major electrical utilities, have their teams ready for response in case of power outages. The larger of the two, Eversource, is said to have 99 response crews and 44 trees crews available. Because very cold temperatures – single digits brought to below zero by the wind chill factor – are anticipated to arrive with the evening, “cold weather protocol” has been put into place, the governor stated. That means officials will be visiting places where the homeless are known to congregate in order to bring them indoors.

In addition to snow and wind, the state is experiencing thunder snow.

“I’ve seen it myself on the Hartford/West Hartford line,” Malloy said.

Although Winter Storm Chris is a major storm, said Malloy, it is not expected to bring amounts like 30 inches of snow. The governor pointed out he had dealt with such excessive high snowfall in the past.

Schools began posting closings last night. The University of Connecticut today cancelled classes on campuses in Avery Point, Greater Hartford, at the School of Law, in Stamford, Storrs and Waterbury. For information about UConn Health classes call 860-679-2001. Heads of public works departments throughout the state were advising it would be best for those who do not have to drive today to stay home, and for those who must, to exercise caution.

The NBC Connecticut weather team is reporting snowfall will be heavy at times accompanied by strong winds from 15 to 40 MPH which could impact travel and public transportation. Accumulation amounts will likely vary in different parts of the state.

Meanwhile, the snow has to be great news for Connecticut’s ski areas. Mount Southington, Ski Sundown in New Hartford, Mohawk Mountain in Cornwall, and Powder Ridge in Middlefield are all reportedly open today.

Interestingly, this “major storm” comes one day before the February Snow Moon tomorrow night. According to the Farmer’s Almanac, the February full moon was named a “Snow Moon” by American Indians/Native Americans because although January tended to be the coldest of winter moons, February tended to be the snowiest. In fact, look for what an online source describes as an “unusual celestial trifecta” in the night sky on February 10, 2017 – a Snow Moon, a penumbral lunar eclipse and a comet.