Destination: Hometown Kitchen at the Plaza in Somers, Connecticut

Hometown Kitchen is aptly named. Tucked inside Southfield Corners Plaza in Somers, Connecticut it is the kind of restaurant best known to locals. In fact, I first ate here a number of years ago when it was called Kathy’s Playhouse because it was a favorite stop for one of my brothers, F.W. and his wife, who were both teachers in a nearby town. 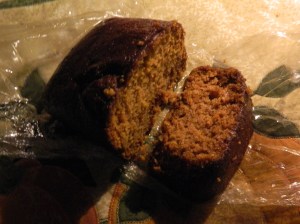 What brings me back is the scrumptious pumpkin bread which I was told by a waitress is still homemade by her sister, the former owner. Moist, flavorful and so popular it is sold by the loaves, it is as tasty as the pumpkin bread that used to be served at the old Putney Inn in Vermont. 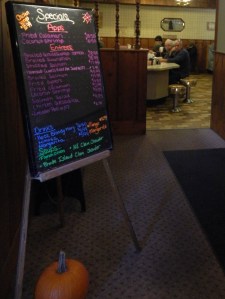 Comfort food dominates the rather extensive menus that also include items such as broiled or stuffed salmon, salmon salad, New England or Rhode Island Clam Chowder, French Onion Soup and much more.

Decor is older but pleasant. There is a dining room and a

separate counter area. It is a safe guess that patrons are longtime and loyal. Breakfasts here are clearly a ritual for some.

At one time when I was privy to the local buzz, Somers was considered an “old money area” and may still be. It was named by MONEY Magazine as 53rd on a list of best places to live in the United States, is home to Shallowbrook Equestrian Center http://www.shallowbrook.com (which will hold rated horse shows on October 29 and November 20). As well, Somers is home to a number of horse farms, is a host of the annual Four Town Fair, and is among the first places I remember hearing of holding a New England chili festival, which was a favorite of one of my other brothers – Glen Sr.

It is a pretty ride along country roads to reach HOMETOWN Kitchen. To make redundancy redundant, that is particularly true at this time of year surrounded by beautiful autumn foliage which is expected to peak in central Connecticut this coming weekend – October 21, 22 & 23.

Truth be told however, if you are in Somers you are already off the beaten path. Why not try a restaurant that is too.