Hamburg dressing made by her daughter Jackie can be found in Mom’s Recipe Box. (Note the black, iron skillet that belonged to my mother Cecelia and before her my grandmother Delia.)

the Crowning Glory of My Mother’s Holiday Recipes

For me, and I would dare say all of us who grew up enjoying it, the aroma and taste of my mother’s hamburg dressing is quite simply the aroma and taste of Christmas and the holiday season. Assuming it was safely in Mom’s recipe box, the first Christmas after her passing in 2010 I went in search of her hamburg dressing recipe. It was nowhere to be found – leaving those of us who loved it so, to try and recreate the formula.

Each of us could vividly recall Mom/Nana standing vigilant by the stove with her black, iron skillet – which had belonged to her mother – filled to the brim with the ingredients. Yet, none of us could remember precisely what went in to it because it was my mother who always made the hamburg dressing – even in her latter years when she sat on a stool by the stove to do the cooking. My sisters and I remembered a spice or two and my niece Debbie said she thought Nana would sometimes add in meat from the cooked turkey neck. It was a favorite of my nephews Mike and John, so their mother, my sister Dixie, had put together her own version of it.

Just as Mom had fretted that her batches were never as good as her mother’s, my sisters Muriel, Dixie, Candy and I, and Deb, fretted that our attempts would never match Mom’s/Nana’s results.

I was coming to terms with the fact that Mom’s recipe, based on my grandmother Delia’s recipe, might be gone until I was searching through old photographs for the “Mom’s Recipe Box Family Series” when – ‘what to my wondering eyes should appear’ – a small, white index card in my mother’s handwriting that read, “Hamburg Dressing”! Speaking to just how precious this recipe is to our family, it had evidently been placed with the family photos to be framed. Some of her recipes Mom had typed but a number of them she hand wrote. I am so thankful that this particular one I have as a keepsake is in her penmanship.

Sharing this recipe would feel a bit as if I were opening the curtains to reveal the wizard behind them, were it not for the fact that it was apparently already published. Though we have not yet come across the edition in which it appeared, we were told that Mom’s Hamburg Dressing received a Honorable Mention in Yankee Magazine several years ago.

So, here I share with you our family treasure.  Merry Christmas! – Jackie 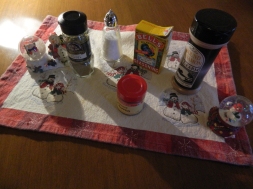 Most importantly Mom seasoned her hamburg dressing with … love.

My mother loved pies – strawberry rhubarb, blueberry, custard, Boston Cream, lemon meringue, apple – but New England Pumpkin Pie was her holiday favorite. When she baked pie, often it was more than one at a time especially at Christmas. As a child, I found the most eagerly anticipated part of her pie baking to be the dough left over from the homemade pie crusts.

I would venture to guess the first baking experience for many children in our family was at her side with leftover pie dough made into Cinnamon Sugar Treats. Using the rolling pin and cutting board that also once belonged to my grandmother – “Ma” – my mother would roll out the dough then place the bottom crust in a pie plate. Next came the filling followed by the top crust. When the top crust was in place Mom would lift the pie plate into the air holding it aloft from the bottom with one hand, then twist the plate from side to side as she trimmed off the excess dough with a kitchen knife in her other hand.

My mother’s cutting board and rolling pin have been used to make many pies and Cinnamon Sugar Treats.

The leftover dough became a joyful opportunity when passed to the child at her side who was allowed to form it into a ball, then roll it out flat on the cutting board with the rolling pin, both having been lightly floured – and then sprinkle it with mixed cinnamon and sugar. Next the dough was hand rolled into a log. Under Mom’s guiding hand, the log was cut into Cinnamon Sugar Treats which were placed in a round cake tin and put in the oven. I still have my mother’s cutting board and rolling pin.

Sift together dry ingredients – sugar, salt, cornstarch, cinnamon, ginger and nutmeg; mix with can of pumpkin then add beaten eggs along with melted butter, molasses and milk.

Pour mixture into pie plate; bake at 450 degrees for about 15 minutes then reduce oven temperature to 350 degrees and finish baking for approximately 50 minutes.

Homemade pie crust dough (from allrecipes.com): 2 and a half cups all-purpose flour, one fourth teaspoon salt; 3 tablespoons white sugar; one fourth cup vegetable shortening; 12 tablespoons butter, cold and cubed; one fourth – one half cup ice water. Sift together flour, salt and sugar then add shortening and cold butter cubes blend together; next slowly add ice water but do not over meld. Chill 30 minutes before using.

Mom’s treat – trim excess dough from pie plate edges and form into a small ball to be flatten with a rolling pin on a cutting board – both having been lightly floured. Sprinkle on desired amount of cinnamon and sugar mixed together; roll into a log then slice into quarter inch pieces; bake in round cake tin at about 350 degrees until slightly browned. Watch carefully and don’t overbake.

Simple and tasty. A perfect first baking adventure for a youngster. Thanks Mom.

Look for Mom’s Recipe Box weekly on Fridays as family members add to and celebrate my mother’s collection of recipes – the Cecelia G. Bennett Collection. – JB