Photo by Jacqueline Bennett  After a light snowfall, a frog in scarf on the “Frog Bridge” in Windham, Connecticut.

A distinctive splash of red twirled around four gigantic green frog sculptures, perched atop spools of thread on the “Frog Bridge” has become a whimsical sign of the holiday season in northeastern Connecticut’s Windham county. Upclose, at a distance, front view or rear view, one might say the frogs in scarves visual – jumps out – to greet travelers.

Flurries playfully accented the 11- foot-tall bronze statues following a recent, early December snowfall, likely among the first of many snowflakes that will descend throughout the coming winter. The bright red scarves clearly bring holiday warmth to these creatures from the deep. 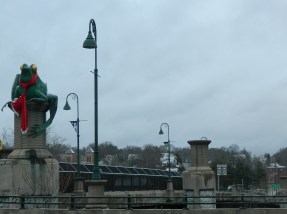 Four frogs squat, one perched on each corner of the bridge spanning the Willimantic River and Windham rail line from Pleasant Street (Route 32) to Main and Jackson streets ( Route 66) in “Thread City” –  what was the city of Willimantic until its consolidation with the town of Windham as noted on Connecticut Roads at kurumi.com.

Built in 2000, though commonly known as the “Frog Bridge” the site is officially called “Thread City Crossing” in recognition of the nearby former American Thread Company that once dominated the local economy producing thread used throughout the country. A section of the old thread mill complex is now a museum.

This four lane bridge is adorned too with vintage style lanterns for lighting. The “Frog Bridge” leads to Eastern Connecticut State University which is located in Windham, and the University of Connecticut about ten miles up Route 195 in Storrs.

Quite riveting, or should that be “ribbiting”, the frogs in scarves have been written about in many a travel log and elsewhere. Nevertheless, although these frogs may be the most high profile in Windham, they are hardly the only ones in town. Frog representations can be seen from one end of the city to the other.

How did frog fascination get started in Windham?

It can be traced back to a summer evening in June of 1754, according to ConnecticutHistory.org. A drought in the area led an army of bullfrogs to all seek water from the same pond resulting in a noisy frog fight. However, in the darkness of the night the origin of the frightful noise was unknown to residents who are said have armed themselves with muskets in defense of what they feared might be an Indian attack. When daylight arrived, bullfrog corpses were discovered strewn about. In the tradition of wry New England humor thus began the ensuing folklore about the Windham “Frog Fright”.

How ever the fascination with frogs got started, for those who pass by the “Frog Bridge” its frogs in scarves are sure to tickle a seasonal fancy.