Decorated in holiday style Gillette Castle in East Haddam, Connecticut is marking the 100th anniversary of its construction. Stone formations border a pathway to the castle where pine sprigs adorn exterior sections of the 24-room “medieval-looking” mansion. Actor, director and playwright William Hooker Gillette had it built, beginning in 1914. It took five years to complete this exquisite structure on his 184-acre estate atop a hill know as the “Seven Sisters”, overlooking the picturesque Connecticut River. 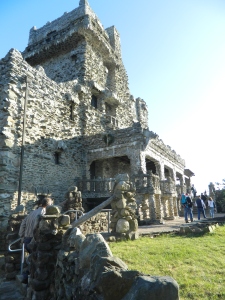 A steady flow of visitors ascend the stairs to Gillette Castle.

According to guides at the castle during a December 14 visit, Gillette designed the castle and influenced most every aspect its of contents. Its features include “near vertical stairways”, built-in couches, intricately carved wooden latches on some 47 doors – of which no two carvings are the same, the use of hand-hewn southern white oak inside, light switches of carved wood, private bathrooms for the bedrooms, the solitude of his third floor library and his own small railroad on the grounds.

Put together with perfection, the tasteful turn of the 20th Century décor, and period garb donned by the guides gave one a sense of stepping back into a gentile time of high society when gentlemen and ladies dressed for dining. Santa Claus was on hand, having obviously searched his closet and found an era suit to wear and pose for photos with guests.

Born in Hartford in 1853, Gillette was a descendent, on his mother’s side, of the founder of Connecticut’s capital city, Thomas Hooker, according to http://www.stateparks.com/gillette_castle.html, a Connecticut state parks website. His father, Francis Gillette, served in the United State senate. William Gillette was a graduate of Hartford High School and attended classes at many prestigious colleges but did not receive his degree. Instead, bitten by the acting bug from a young age he went on to become a star with his most famous role being that of Sherlock Holmes.

His final performance was at Hartford’s Bushnell Theater in 1936. He died a year later. 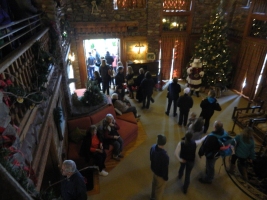 A bird’s eye view of the main floor at Gillette Castle – notice the built-in couch to the left.

Paying homage to Gillette’s career, one guide was dressed as Gillette taking on the Sherlock Holmes persona. “My wife died after six years of marriage and had asked me to never remarry,” he said, “I did not, but I, Mr. Gillette, at 6’4″ and quite a handsome man did have lady ‘friends’.” 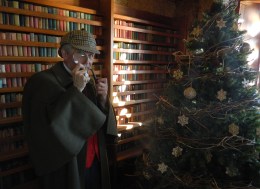 In the upstairs library, a guide takes on the persona of William Gillette in his most famous role of Sherlock Holmes.

Interestingly, though Gillette was tall, his bed was short. That was explained as due to his being accustomed to tight quarters on trains traveling from town to town to perform. He was said to have spent time most afternoons when he was at his castle, in his library reading, another room with a breathtaking view of the Connecticut River. 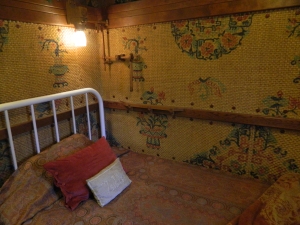 William Gillette was tall but his bed was short.

Many notables from the theater world were guests at Gillette Castle. Among them, actress Helen Hayes who is said to have always come with a chaperon, and Bille Burke who played Glinda the good witch in the “Wizard of Oz.” Gillette was also described as a friend of Samuel Clemens, a.k.a., writer and humorist Mark Twain.

A peek at the majestic Connecticut River from a window in the library at Gillette Castle – note the intricately carved wooden shutters.

Gillette Castle is located in Gillette Castle State Park, having been purchased by the state of Connecticut in 1943 from the executors of Gillette’s will, notes the state Department of Energy & Environmental Protection. 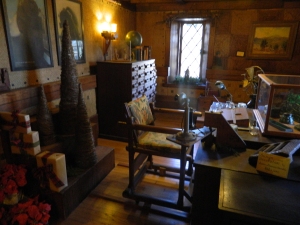 The train station Gillette had built is easy walking distance from the castle. There are also trails to stroll. During the holiday hours along one of the trails, an open pit fire was available by which one could warm up, and there was hot cider.

A view of the Connecticut River from the grounds of Gillette Castle. 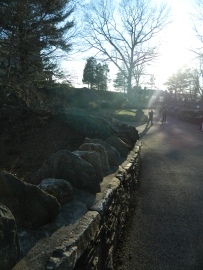 Path to the castle.

Just outside the castle’s sun room. 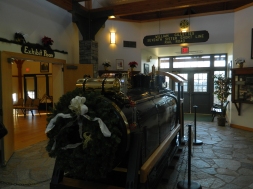 Inside the nearby Visitor’s Center, guests can buy their admission tickets, watch a 15 minute video and visit the small gift shop. In an adjacent building is a grill and beverage place but it was closed this past Sunday.

The holiday tour is certainly a wonderful way to learn about the life and times of an interesting man who added to the colorfulness of Connecticut’s history Really, it seems in any season Gillette Castle would make for a fascinating stop.