Angel Food Cake from her son Frederick II has been added to Mom’s Recipe Box. (Fred shown in his bachelor days with the car he bought after being hired for his first teaching position.)

A favorite pastime for my brother Frederick II and his wife was hosting and attending bridge parties, for which she would make homemade treats.

When my brother was back on his own, he maintained the friendships the two had as a couple and decided he would make something himself  for the bridge games, relying on a favorite of his from his bachelor days – Angel Food Cake.  Courtesy of Betty Crocker mixes, the Angel Food Cake became anticipated and quite popular among his bridge buddies!

He has since retired his baker’s cap so for this edition of “Mom’s Recipe Box”, I baked an Angel Food Cake on his behalf.– Jackie 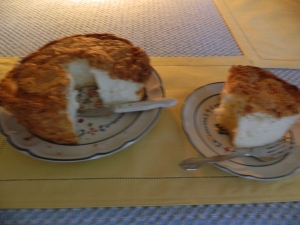 Remove top racks from oven and use the bottom rack; Preheat oven to 350 degrees;stir mix and water together in bowl then pour into (preferably non-stick) fluted, angel food cake pan – no smaller than 10″ x 4″ (other pan styles can be used); bake until golden brown – between 37-47 minutes: Turn upside down onto glass bottle to cool; after cooling turn upright and carefully run kitchen knife along pan edges to loosen, before removing cake.

Suggestion: Top with freshly sliced strawberries or blueberries and fat-free whipped cream for a light and tasty dessert.

Look for Mom’s Recipe Box weekly on Fridays as family members add to and celebrate my mother’s collection of recipes, the Cecelia G. Bennett Collection. – JB