They may live next door, be seated nearby at a town meeting, attend a free summer concert in the park or be timidly pushing a cart in a grocery store. They are your neighbors, unsure of where their next meal will come from and their numbers are growing. Hunger is on the rise in the United States as the middle class shrinks say food bank directors. More and more Americans keep trying to tread water after a  job loss, due to wage stagnation, inflation, low wages or are retirees living on fixed and very limited funds.

In Connecticut’s Hartford and Tolland counties alone, the regional food bank, Foodshare, estimates more than 100,000 people are living in food uncertainty limbo – they do not know where they will get their next meal. A majority of them are either children or senior citizens.

On Sunday, May 4, members of the Windsor Food & Fuel Bank and supporters were among a vast turnout of teams and individuals taking part in the 31st Walk Against Hunger held by Foodshare. Thousands of walkers gathered at 12:30 p.m. Sunday in HartBeat Park on the campus of The Hartford, the event’s lead sponsor, in preparation for a 2:00 p.m. step-off. The approximate two mile walk brought the group down from Asylum Hill and around Bushnell Park in downtown Hartford. 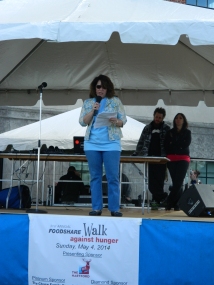 Walkers made their way around Bushnell Park. 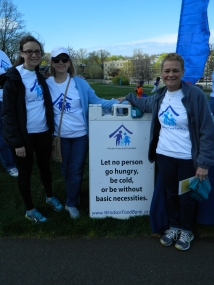 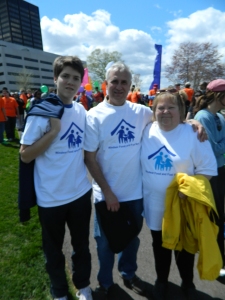 Jane Garibay of the Windsor Food & Fuel Bank Board of Directors with her husband Bernardo and his nephew Diego Vazquez, 17, an exchange student visiting from Mexico City.

“Just as with the fire department, this is helping people from our own town – neighbors who need our help,” said Thomas Dillon, Safety Officer for the Windsor Volunteer Fire Service.

Jane Garibay co-president of the Windsor Food & Fuel Bank Board of Directors said the need is so great locally that the board decided it was time to appoint their first executive director, in order to more effectively address the problem.  They appointed Eric Lazarus who begins his duties today and captained the Windsor team.

“The need has grown, some are those who used to donate. The human services need is greater,” said Garibay. 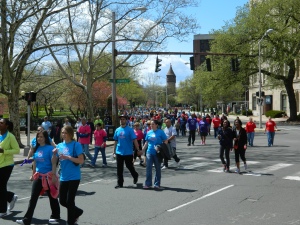 Foodshare reports the number one “team” fundraiser this year was The Hartford Enterprise Business with $31,763.02 at the time of registration. The top ten fundraiser teams are listed on their web page at foodshare.org.

“A lot of my goals are marketing related, talking with donors and corporate backers,” said Lazarus, who has a corporate background.

The Carmon family of Windsor has graciously provided Lazarus with an office at 6 Poquonock Avenue he said, in the same building that houses Mary’s Place – A Center for Grieving Children.

As far as Len Swade is concerned there is no excuse for hunger in America. A longtime member of Windsor’s Human Relations Commission who also volunteers for the Windsor Food & Fuel Bank, Swade noted the Windsor Democrat Town Committee recently passed two resolutions taking aim at policy-making on the national level. Windsor Democrats want the nation to follow Connecticut’s lead in raising the minimum wage and to tackle what he said is wage inequality in the nation.

“There is a need to feed the hungry,” said Swade, explaining why he participated in the walk.

Diego Vazquez, 17, is an exchange student from Mexico City attending Northwest Catholic High School while visiting his uncle and aunt Bernardo and Jane Garibay. He joined them on the walk.

“It is important to help out people in the community,”said Diego.

“We wanted to help teach the children the importance of community service,” noted Wellington.

The motto of the Windsor Food & Fuel Bank is “Let no person be hungry, cold, or without basic necessities.” It is a non-profit organization and donations can be made by mail at P. O. Box 854, Windsor, CT 06095 or, online by contacting windsorfodbank.org.