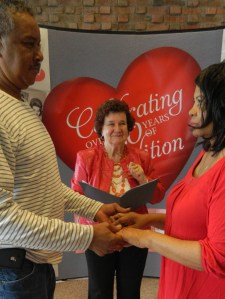 Romance filled the air February 14, in Windsor, Connecticut where for the 52nd year the state’s oldest town offered free marriage licenses on Valentine’s Day. Several couples not only picked up their licenses but also tied the knot at Windsor Town Hall.

A half dozen weddings took place Friday morning and at least three more were planned for late afternoon – plus Justice of the Peace Anita Mips was prepared for impromptu ceremonies such as one she stood ready to officiate for Ronnie Williams and Trena Canty. Together for seven years, the Hartford couple recently decided the time was right to get hitched and had heard about the marriage license offer through a friend.

“My mother is deceased but Valentine’s Day was her birthday,” said Williams. 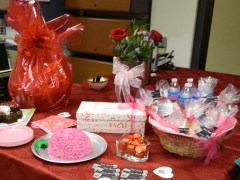 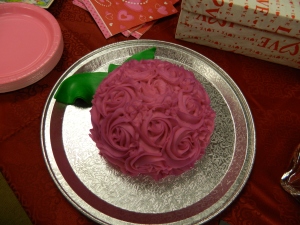 Pink rose blossom cake made by Moneta Moments of Windsor.

The groom and bride said they chose this day in honor of his mother’s memory. They had announced their intention to wed at a recent family get-together.

“No, it won’t be a surprise,” said Canty, clad in a lovely red blouse.

Mips, also the Democratic registrar-of-voters in Windsor, estimates she has performed some 300 marriage ceremonies and says she is glad to donate her services on this very special day for the town.

“This is my favorite thing to do. I donate my services because it is a great tradition and I would like to see it continue. This is the way I can help it continue,” said Mips. 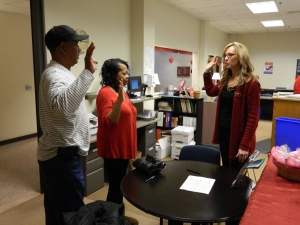 Couples also became eligible for a raffle that featured a large gift basket of items donated by local merchants. Adding ambiance to the surroundings was a table filled with a vase of red roses, Valentine’s Day sweets and a beautiful pink rose blossom cake made by Moneta Moments, LLC, 1077 Palisado Avenue, the “100 % peanut and nut free” shop creates -“cupcakes & more”  (www.monetamoments.com).

The Windsor tradition was begun by former town clerk, George Tudan in 1962. Several years later his own daughter and her fiance took part in the tradition and were on hand in 2012 to renew their vows when the town celebrated fifty years of giving away free marriage licenses. It was an extraordinary experience for Mips who recalled officiating at several vow renewals that year.

“Most memorable for me were the reaffirmations I performed at the 50th anniversary,” she said. 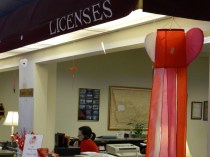 In 1962, a marriage license in Windsor cost $5, today the “value of the gift” is $30. Of course, one could say the value of the town playing Cupid for the couples  – priceless.