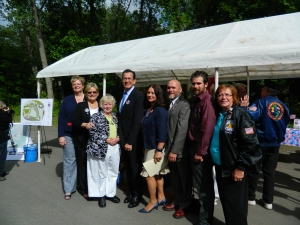 Photo by Jacqueline Bennett – Members of the Connecticut Trees of Honor Memorial Committee shown with Gov. Dannel Malloy when he announced selection of the Middletown site in June 2012.

Help move the earth in honor of Connecticut military service members who sacrificed their lives in the wars in Iraq and Afghanistan.

Thanks to a recently signed lease agreement between the Connecticut Trees of Honor Memorial Committee and the city of Middletown, construction of the living trees memorial is slated to get under way this spring. Construction professionals are “urgently needed to volunteer a few hours, a few days, or a few weeks” during the springtime earth moving and construction period. Other volunteers are also needed. As well, a fundraiser is set for March 8 in Glastonbury. 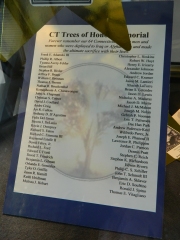 “We are most excited to announce this grand news and hope you will join in the effort to raise awareness and funding for this beautiful memorial project,” CTHM president Sue Martucci stated, speaking of the agreement in a recent newsletter.

Meant also to honor all American veterans, the living trees memorial will be built in Middletown’s Veterans Memorial Park featuring a grove of trees with one tree representing each Connecticut service member who died in the wars in Iraq and Afghanistan. Currently, 65 “hero trees” are planned. Other plans for 2014 include excavating the reflecting pond and grading the memorial area in order to plant the trees, according to the CTHM newsletter. Also, individual granite posts will be installed, laser etched granite plaques, flag poles and flags.

A model of the CT Trees of Honor Memorial.

More funds are needed to continue with the memorial design which is to have a stately entrance plaza, commissioned sculptures, monuments, signs, benches and gardens. The committee is appealing for individual, group organization, veteran and corporate support.

Volunteers are needed to help in a variety of ways – construction professionals willing to donate their time are asked to contact Sue Martucci at  860-841-4287 or suemartucci@gmail.com.

Fundraising volunteers to assist with planning and then organizing events for 2014, and, “media and marketing enthusiasts” are also needed to help get the word out about the project – contact Diane DeLuzio for more information at 860-930-9048 or d.deluzio@cox.net.

Martucci extended her thanks to Brian Kronenberger, construction advisior and Tom Linden, landscape architect for thier ongoing involvement in the project.

A groundbreaking and Phase I dedication date may be announced at the March 8 pasta dinner. Progress for the memorial can followed on http://www.facebook.com/cttreesofhonor.