The 2012 Veterans Parade in Hartford, Connecticut was held Sunday, November 4. It was a consummate November day in New England characterized by sunny skies, crisp, cool air and some colorful leaves still clinging to the trees. The perfect autumn weather was in marked contrast to the high winds and rain brought by Hurricane Sandy a week earlier that devastated areas along the Connecticut shoreline, as well as, parts of New York City and the New Jersey shore.

Although there was a solid turnout for the parade, it did not appear to have been as large as in past years – possibly a consequence of the recent weather event that left thousands of residents without electrical power for days. As of Sunday night, Connecticut Light & Power and United Illuminating had reportedly reached their goal

for that time frame, to have 98 percent of power restored.

The 2012 Veterans Parade in Hartford, Conn. passes through the Soldiers and Sailors Memorial Arch. 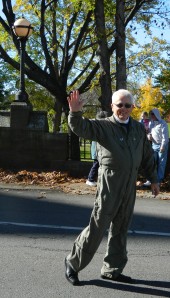 Stepping off near the state capitol building the parade made its way beneath the Soldiers & Sailors Memorial Arch then through the downtown, featuring numerous contingents of veterans.

Among others participating were the governor’s horse and foot guards, the New England Air Museum, various fife & drum corps – including one from the Connecticut shore – Westbrook. In addition there were high school marching bands, bagpipe units and marchers representing Colonial era soldiers who shot off muskets en route.

CT Trees of Honor was also represented. Headed by Sue Martucci who rode in the parade, the CT Trees of Honor committee is working to establish a memorial grove of trees in Middletown to honor the American military personnel who lost their lives in the wars in Iraq and Afghanistan.

Brad Davis who served in the US Marines.

A moment of silence was held at 1:30 p.m. The Patriot Guard Riders who attend military funerals in an attempt to keep war protesters at a respectful distance, had a strong presence in the parade –  their motto, “Standing for those who stood for us.” As service men and women passed by many spectators expressed gratitude, shouting out “Thank You.”