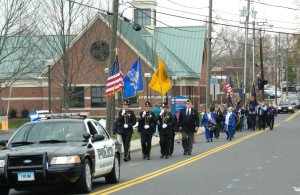 Gratitude to America’s service men and women was the focus of  the simple, respectful 2012 Veterans Day Observance held November 11 at 11:00 a.m. at Manchester Memorial Hospital. A small parade made its way from American Legion Post #102, about a quarter mile to the hospital.

“When I think of  Veterans Day, I think of two words – thank you and heroes,” Manchester Deputy Mayor Jay Moran told the group gathered in front of MMH. 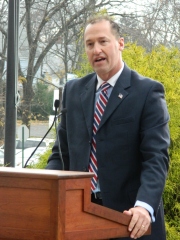 Moran spoke of a recent visit he and other local officials made to Bethesda Memorial Hospital where they met an Ellington, Conn. soldier who lost both his legs in combat, as well as, other young men and women who also lost limbs in the wars in Iraq or Afghanistan. Yet, the deputy mayor poignantly pointed out, they remained patriotic and glad to be alive.

“I was in awe. I was in tears. I was proud of the way they served our country,” Moran said.

“We need to take care of our veterans,” he added, noting to help do so Manchester has partnered with the Purple Heart Association.

The ceremony was called to order by Benton “Ozzie” Osgood who served as a Marine in Korea.

Guest speaker Mark Tweedy talked about the combined decades of military service given by himself, his father and brothers.And, he expressed pride in Manchester’s service to the nation dating back to the Revolutionary War.

The observance included a wreath laying by a monument in front of MMH by members of American Legion Auxiliary Post #102 and the Veterans of Foreign Wars Auxiliary Post #2046, the Pledge of Allegiance led by Scot Holmes, an a cappella rendition of the national anthem and a recitation of the poem “In Flanders

Fields” by Mary Kelly, past chapter commander of the Disabled American Veterans Chapter #17.

As those in attendance either saluted or placed their hands over their hearts “”Taps” was played by Jim Mosher – Salvation Army Past Sub-Base Chaplain followed by Robert Carrana of the Manchester Regional Police and Fire Pipe Band performing “Amazing Grace” on the bagpipes. Retirement of the Colors was done by members of American Legion Post #102, Disabled American Veterans Chapter #17, Veterans of Foreign Wars Post # 2046 and Vietnam Veterans of America Chapter #120.

Roberta Pacheco of South Windsor summed up the sentiments of the ceremony, carrying a sign that read: Thank You to Our Veterans.