At the Capitol With Connecticut State Representative Jane Garibay 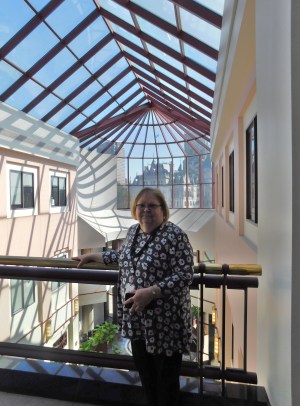 State Rep. Jane Garibay (D-60th) at the Legislative Office Building ~ through the window in the backdrop can be seen Connecticut’s Capitol building in Hartford. Photo by Jacqueline Bennett 3/28/2019 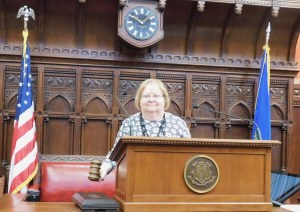 State Rep. Jane Garibay served as Acting Speaker of the House and presided over a Technical Session. Photo by Jacqueline Bennett 3/28/2019

It was an interesting day spent March 28 with State Representative Jane Garibay at the Capitol in Hartford, Connecticut. Garibay represents the 60th District, covering Windsor and Windsor Locks.

A freshman legislator, Garibay won election in November 2018, defeating a Republican incumbent. In her first year on the hill, she has already co-sponsored a bill.

“I am honored to serve the people of the 60th district and to share this incredible journey,” she said, “I am proud to serve with so many dedicated legislators working for the good of the people in their districts and state.”

Part of the journey is learning the ropes at the state Capitol. With a desire to share what she is learning with voters, Garibay has been posting information on Facebook about the legislative processes. She serves on three committees, transportation, commerce and aging. Windsor Locks is home to Bradley International Airport and the rail line travels right through Windsor, so Garibay was eager to be appointed to the Transportation Committee.  This session it has been a ‘hot seat’ committee as a result of Democrat Gov. Ned Lamont’s proposal to reinstate tolls on Connecticut highways. Opinions among Connecticut residents run strong on both sides of this topic, as such, protesters have been at the Legislative Office Building (LOB) making their feelings known. As the bill heads for the General Assembly, Garibay said she is reserving her decision on which way she will vote until she sees the bill in its final form.

Other high profile, controversial issues the legislature is tackling this session are the legalization of recreational marijuana and a motorcycle helmet law.

Although Garibay is new to the legislature, she brings a wealth of experience and knowledge from her years serving as president of the Windsor Board of Education and executive director of the Windsor Chamber of Commerce, a position she left before signing on to her current job as director of First Town Downtown. Her work on the legislative Commerce Committee includes a continuation of her long-time efforts to help small businesses thrive.

Connecticut she said is truly an extraordinary state known for its well-educated, well-trained workforce and with an enviable location between New York and Boston. Her goal is to keep Connecticut’s workforce well-trained. As well, she is focused on ensuring the state’s future success by striving to find ways to keep our young people here ~ millennials and subsequent generations ~ and to expand the concept of success beyond a college education to include other types of higher education. One proposed bill coming out of the Commerce Committee seeks to encourage economic growth and job creation by promoting careers in manufacturing to public school students and by establishing a task force to study the demand for career and technical education teachers.

“There will be over 25,000 open manufacturing jobs to be filled in Connecticut in the next 20 years,” Garibay notes on her legislative page.

Reflective of the state as a whole, Windsor and Windsor Locks have aging populations. That also makes her work on the Aging Committee critical to their needs, Garibay added. 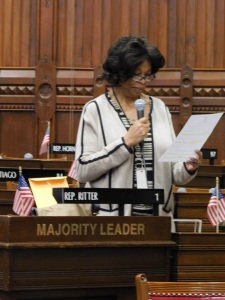 Among the procedures that Garibay has learned about, is the requirement that the House meet daily while in session. This is a requirement that can be met by a Technical Session often utilized to approve bills that have bi-partisan support and are not controversial. At least two legislators must be present. On the day of this interview Garibay served as Acting Speaker of the House and presided over the Technical Session with Rep. Pat Wilson Pheanious (D – 53) serving as Acting Majority Leader. The public/press can be invited into the chambers to observe firsthand and even participate. I was asked to help open the session by reading a prepared daily prayer, which I did ~

The view from Garibay’s office on the fifth floor of the LOB is a piece of Connecticut’s history ~ the Connecticut State Armory built in 1906. Hanging on her walls she has two large prints of photographs taken by accomplished Windsor photographer Len Hellerman which he and his wife hand-delivered to Garibay at the LOB.

One print is the Windsor Train Station, the other depicts aeronautics in Windsor Locks.(click to enlarge)

The days are full for Garibay. And, back in her district she holds monthly coffee hours to meet with constituents, alternating between Windsor and Windsor Locks.. Only months into her first term and she has co-sponsored a bill with a young legislator, Sen. Will Haskell (D-26). The proposed bill is a reward program for state employees who report wasteful practices.

“I love being a legislator and I am learning how the legislature works. Fellow legislators and staff are very supportive making an overwhelming job much easier,” said Garibay.