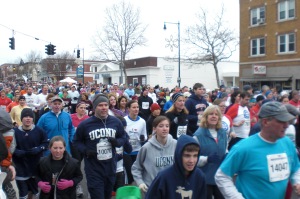 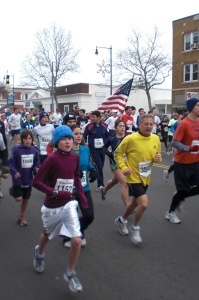 The 80th running of the Manchester Road Race will take place Thanksgiving Day, November 24, slated to start promptly at 10:00 a.m. One of the largest sporting events in the Nutmeg state, MRR was honored in May with the presentation of the 2016 Connecticut Sports Writers’ Alliance Award recognizing the race’s “significant contribution to sports in Connecticut”.

Last year 13,892 registered runners participated, MRR organizers report. Of course, MRR is well-known for it ‘rogue’ runners who run but do not register, they can be seen folding into the race after it gets underway. It is equally well-known for its “high-spirited” atmosphere where runners often show up in costumes and bands play along the race route.

The loop footrace through the streets of Manchester covers 4.748 miles, beginning and ending in front of St. James Church on Main Street. In 2015, first place for men was taken with a time of 21:34 and 24:15 for the women. 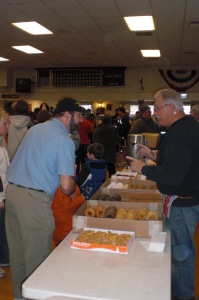 Inside the Army & Navy Club.

New this year, for security reasons “seeding” for likely top competitors will be kept to 42 minutes”, as well, seed areas have been reduced. Pre-race day activities have become increasingly popular say race organizers, and will be combined for the 80th MRR into what’s being called “Road Race Saturday”. “Organizationally it just makes sense,” MRR Race Director Jim Balcome was quoted as saying.

Something that remains the same, is an opportunity on race day to warm up inside the Army & Navy Club on Main Street while enjoying coffee, hot chocolate and donuts! Accu Weather is predicting Manchester weather to be 53 degrees and cloudy on Thanksgiving Day.

Scheduled for November 19, “Road Race Saturday” will feature a 7:30 a.m. start of Little MRR for children under 12 (in its seventh year), an 8:00 a.m. start for the Silk City Strider’s “Know Your Pace”, and a Sports & Fitness Expo at Bennet Academy on Main Street. New Finish Line t-shirts can be purchased at Frame Dimension, 681 Main Street in Manchester or 995 Farmington Avenue in West Hartford.  Proceeds from the race benefits Muscular Dystrophy research and other charities.