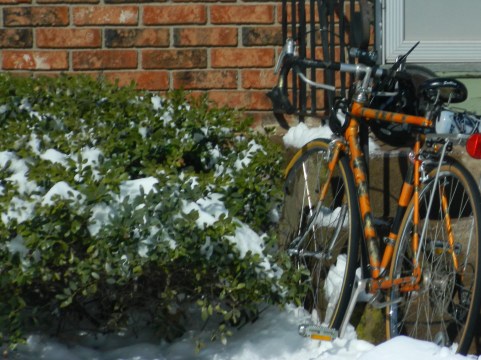 For seasoned New Englanders snow in April is not way out of the ordinary. Nonetheless, on the heels of a mild winter for much of the region, three consecutive snowfalls on Sunday, Monday and Tuesday of this week which required road and car clearing to begin the month, came as a surprise.

Despite the fact spring has arrived on the calendar, at a point when folks were ready to take their bicycles for a spin, instead snow shovels are back in action. The weather is confusing Mother Nature once again. A batch of unusually warm days this past winter caused some trees to begin an early blossom; now when full blooms should be just around the corner buds are snow covered.

Giving new meaning to the expression “hardy New Englander”, however, events such as the annual Hockanum River Canoe & Kayak Race scheduled for Sunday, did go on. Come Monday and Tuesday, however, numerous school districts announced 90 minute or two hour delays. And although seeds and gardening tools have taken prominent positions on store shelves, planting must wait.

Photo taken April 6, 2016 – Notice the icicles hanging off the fence to the left of the ready-for-spring Potter’s Bench.

“The Old Farmer’s Almanac” http://www.almanac.com which has been anticipating the weather since 1792 and boasts 80 percent accuracy, says “April will be slightly cooler and drier than normal” in the Northeast. On its website, the venerable publication is predicting cold along with light rain and snow for April 7-10, sunny and nice April 11-13, cool with showers April 14-27, and sunny and warm April 28-30.

Thus far in central Connecticut, April thermometers have dropped as low as the 20 degree range. As recently as this morning, icicles are still being formed.

Not to worry, the sun is shining today. Local meteorologists are forecasting showers for later this week but they are foretold to be of the more seasonal rain variety.