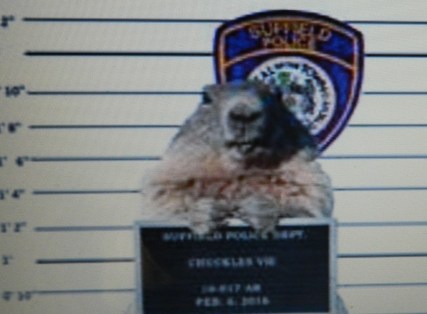 It’s a safe bet that Chuckles VIII, isn’t chuckling now. Reports of the groundhog’s arrest for making a “first-degree false statement” broke locally with news of her mugshot being posted on Facebook, while she was held in lockup by Animal Control in lieu of a $10,000 bond, awaiting trial, and if convicted could have faced up to six weeks in jail.

In what can well be described as wry New England humor – yes, it’s all in fun.

NBC Connecticut News and an article written by Aysha Mahmood for the Manchester, Connecticut-based Journal Inquirier jovially detailed the arrest. Suffield, Connecticut police are said to have put a “warrant” out on Chuckles who resides at the Lutz Children’s Museum in Manchester, in the aftermath of a snowstorm that left parts of the state under a foot or more of snow. The storm stranded motorists, and at peak outage, resulted in a reported 65,000 Eversource electric customers being without power, primarily due to tree limbs sagging across power lines which snapped. The “snow event”, as local meteorologists have taken to saying, came on February 5, count them – one, two, three – just three days following Chuckles’ prediction of an early spring.

Hey Chuckles – there is nothing funny about any of that. Chuckles cannot even claim youthful inexperience – the critter is four years old. In animal years doesn’t that make her an adolescent? By now then, she should know better than to lie.

Mahmood wrote that the Interim Suffield Police Chief noted on Facebook, Chuckles was resting comfortably in confinement while receiving three meals daily. Quoting the chief, Mahmood added, “And, yes, she still maintains her innocence,” – “But in my 37 years I don’t remember anyone saying they were guilty!”

Although Chuckles’ mugshot has since been removed and she has been “released”, the joke appears to have captured the imagination of a number of area residents who donated towards bond to get Chuckles sprung – no pun intended – and returned to a comfy man-made habitat at the Lutz. The museum reportedly acted as the groundhog’s “legal team”. At last count $282 was raised, which will go to the Lutz as a fundraising contribution. There has been buzz about a “pardon”.

The question remains however – did Chuckles have an accomplice? Read the following Lutz website post and decide for yourself …

More snow is forecast for tonight.