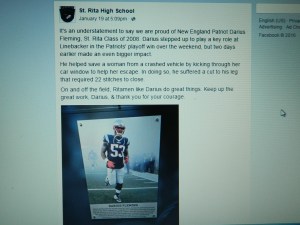 In these turbulent times it can be hard to see the light. Still courage and character prevail in everyday acts – some known, many unknown.

Little did we know at the time, that 26-year-old New England Patriots linebacker Darius Fleming, played against Kansas City on January 16 with twenty-two stitches in his leg. It turns out, according to ESPN, Fleming’s leg was cut while he was driving home from practice when he rescued a woman involved in a car accident on Route 1. Fleming kicked in the passenger window. Here is a young man in his prime playing for a storied team, with a promising NFL career ahead, yet he acted without concern for getting hurt himself. A sweet piece of this story is that the rescue reportedly only became public when his proud high school, St. Rita, posted the account on Facebook.

Darius Fleming steps up off the field https://t.co/96cLC1GAx3 via @patriots #DariusFleming – selfless & brave!

It was just last year in January of 2015 that former Patriot Vince Wilfork,  stopped near Gillette Stadium on the way home along Route 1 after playing the Colts to help a motorist in distress. Wilfork also pulled the woman from her vehicle to safety. Recently, Oscar-winning actor Jamie Foxx “braved flames” to pull a motorist to safety from a burning vehicle.

Another example of individual decency is 23-year-old Joey Resto of Brooklyn, New York , who while riding the subway earlier this month literally took the shirt off his back and hat off his head and put them on a shivering, shaking homeless man. Unknown to Resto, his act of kindness had been captured by a fellow passenger’s cell phone video. Resto was later recognized by New York’s governor in his State of the State address.

“It just came from the heart,” Resto was quoted as saying.

Whether heralded or unsung, I would venture to say that everyday, people step up in small ways and in big ways, not in search of the limelight but acting straight from the heart, motivated by basic goodness.