‘Help Me If You Can, Get Back to the House at Pooh Corner’ – Winnie-The-Pooh Day 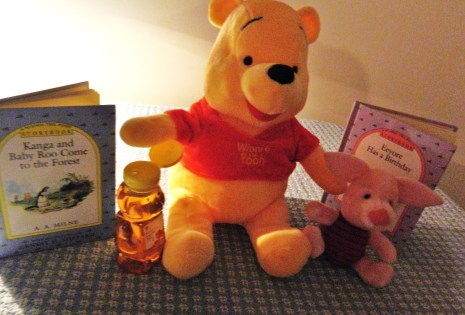 Although blessed with a gifted imagination which gave flight to among the most memorable works of 20th Century children’s literature, it’s unlikely English author, poet and playwright A.A. Milne, could have imagined early in his career creating a children’s storybook character that would become beloved worldwide, even inspiring songs. Yet some ninety years after Alan Alexander Milne first wrote about “Winnie-the-Pooh”, the lovable, antic-prone, fictional bear is not only still known universally but even has his own national holiday.

National Winnie-the-Pooh Day is being celebrated today on the anniversary of Milne’s January 18, 1882 birthday. Milne passed away in 1956. According to biography.com, the “Winnie-the-Pooh” storybooks were inspired by Milne’s young son, Christopher Robin Milne, and a toy bear he had named after an actual black bear he and his father visited in the London Zoo, and a swan with which they had crossed paths while on vacation. Christopher Robin was also character in the books, and Christopher Robin Milne’s other stuffed animals were penned as “Pooh Bear’s” friends – Piglet, Eeyore, Kanga, Roo and Tigger – in their escapades in spots such as the Hundred Acre Woods, which is said to have been based upon an area of Ashdown Forest in Sussex, England. Intriguing illustrations drawn by Ernest H. Shepard depicted the forest’s “high, open heathlands of heather, gorse, brackens and silver birch punctuated by clumps of pine trees”, notes wikipedia.

Written before the era of political correctness, Milne’s developed the “Pooh” character as a “Bear of Very Little Brain”. It may well not only be “Pooh’s” sweetness but his vulnerabilities too, that encouraged readers to embrace him.

Disney eventually franchised the “Pooh character” and he starred on television series and in featured films. More than one song has has been written about “Pooh”. None conveys the mystical persona of “Pooh” and his friends better than “Back to Pooh Corner”, described by one source as an “allegory for the loss of innocence and nostalgia for childhood”.

Written at age 17 by Kenny Loggins when he was a senior in high school, the song seems to take the listener along on a lighthearted, dreamlike journey. “Back to Pooh Corner” almost did not get published, Loggins told The Tennessean newspaper. “Winnie-the-Pooh” was the first book he read as a child and as Loggins approached his high school graduation in 1966 the tale was on his mind, he explained. Unknowingly, Loggins said, he later ran into copyright issues with Disney. The matter, however, was resolved and the song went on to be performed by a number of artists, including Loggins.

Winnie-the-Pooh, timeless. And, it all began with pen put paper by A. A. Milne.