A thoroughly charming Englishman, David L. Davis, greeted visitors December 19 to a “Holiday Extravaganza!” Winter Farmers’ Market in Ellington, Connecticut. Wearing a colorfully designed bow tie and red apron, Davis, owner of Hillhome Country Products, stood beneath a large, beautifully adorned wreath hung on a wooden frame, spooning out samples of preserves he makes and which are known to be so good that he was named a Yankee Magazine Food Awards 2015 Winner.

“Yes, I make them myself,” said Davis.

Displayed and for sale along with bigger jars were appealing gift bags of miniature selections.

“With perfect bows tied by my wife,” Davis said.

Although it has been some fifty years since Davis moved from his native England, his very proper diction accent remains. Needless to say, it adds a touch of elegance to conversation about his Norfolk-based gourmet business http://hillhomeproducts.com which features a variety of preserves, as well as, pickles, dessert sauces and salad dressing. It is a business, Yankee Magazine noted, Davis started in 2009 due to the immense popularity of marmalade he had ‘put up’ and shared with friends. Yankee singled out Berries of the Wood and described the raspberry-blueberry-blackberry blend jam as follows, “packed with large chunks of whole fruit and the perfect amount of sweetness.” Ideal added the editors, on toast, swirled into oatmeal or simply spooned from the jar.

Praising Market Master Dianne Trueb for her organization of the events, Davis said he has been attending Summer Farmers’ Markets at Arbor Park in Ellington for the past two years, which brought him here to the Winter Farmers’ Market. Reflecting a national trend of year round farmers’ markets being held in the United States, Davis was one of several vendors who setup on Saturday afternoon inside the nearly new YMCA on Pinney Road in this upscale New England farming community. 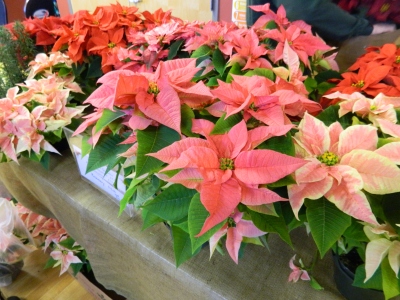 Pies from Luann’s Bakery on the Hoffman Family Farm in Ellington, CT.

According to a press release from the U.S. Department of Agriculture, the number of Winter Farmers’ Markets has been on the rise – jumping in one year, 2010 to 2011, from 886 to 1,225, and representing 17 percent of all farmers’ markets operating in the nation during that time frame. The number rose again in 2012 from 1,225 to 1,864, making winter markets 24 percent of the total 7,865 scheduled that year. Many are being held in climates where winters are cold, such as the New England states.

Defined as those held between November and March, one factor in the Winter Farmers’ Markets upward trend is the advent of hoop houses which are plastic-draped funnels used as inexpensive, unheated greenhouses to extend the growing season. The USDA has been co-funding their purchase for farmers since 2009, noted former Deputy Secretary Kathleen Merrigan. However, the primary reason given for the upswing in Winter Farmers’ Markets is the burgeoning interest among consumers to buy locally grown food throughout the year.

“Through winter markets American farmers are able to meet this need, bringing in additional income to support their families and businesses,” Merrigan stated.

Ellington’s Winter Farmers’ Markets will continue through to March from 2 p.m. to 4 p.m. at the YMCA on 11 Pinney Road, Ellington, Connecticut 06029.