Holiday hours for Gillette Castle State Park are slated to ‘wrap-up’ on Sunday, December 20. Perched above the majestic Connecticut River in East Haddam, Connecticut, it is a treat to see this fascinating showplace decorated at Christmastime. Built from fieldstone with a steel frame it took five years for the castle to be completed, between 1914-1919. The project was overseen by owner William Hooker Gillette, a renowned actor of his time whose most famous role was that of Sherlock Holmes.

The State of Connecticut, which administers the property, purchased it from the executors of Gillette’s will in 1943, according to the state Department of Energy and Environmental Protection. Now part of a state park and open to visitors for a fee, the castle was designed to Gillette’s liking featuring “hand-hewn” Southern White Oak woodwork, 47 doors – none the same and featuring external latches “inticately carved” of wood – built-in couches, table trackways, and multiple floors – including an upstairs library where Gillette is noted to have spent afternoons reading.

Outside are trails, walking paths some with “near vertical steps”, a vegetable cellar, a 3-mile long gauge railroad that one can imagine transported Gillette’s company from the theatrical world on a tour of his grounds, stone-arch bridges, and ‘wooded trestles”.

On the path to Gillette Castle. 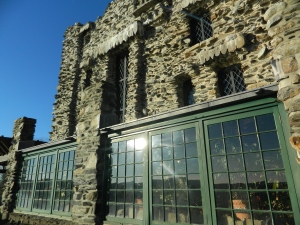 Exterior view of the solarium – inside an ever so small pool of cascading water.

View from the upstairs library at Gillette Castle. 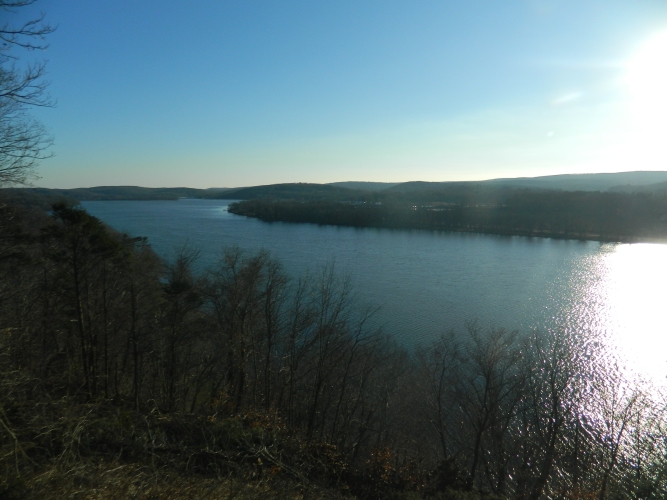 Gillette (1853-1937) was born in Connecticut’s capital city of Hartford and was a descendant of Thomas Hooker, Hartford’s founder. A playwright as well as an actor, his career brought Gillette to many a stage. He is said to have given his final performance in 1936 at the Bushnell in Hartford.

Looking for a dining experience to add to the Gillette Castle visit? The Gelston House Restaurant & Inn as described in New England colloquialism – “is just down the road” – on East Haddam’s Main Street.