Destination: Not Your Grandfather’s McDonald’s, McCafe in Vernon, CT

McDonald’s golden arches have been part of the American landscape since the 1950s. Over the years the appearance of the fast food hamburger chain’s restaurants has been modified to reflect modern trends. Most recently the popularity of coffee houses which continues to sweep the nation has given rise to McCafes and their cozier dining atmospheres. 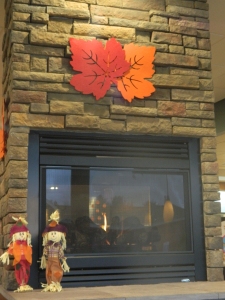 One of the most welcoming of these McCafe incarnations can be found on Talcottville Road in Vernon, Connecticut – this Vernon franchise is not your grandfather’s McDonald’s. Accented by a centrally located, two-sided electric-style fireplace, it has been transformed into a go-to spot. Though McCafe refers to the offering of traditional hot coffee along with flavored ice coffees, lattes, Smoothies, shakes and frappes, many of the stores – such as this one – have been redesigned to create an overall cafe feel.

Seasonably decorated, seating options include booths or large oval tables, some handicap accessible, single stools, and high round tables or small 2-seaters. Computers are typical companions for solo visitors. There are large screen televisions carrying CNN broadcasts, a kid-friendly screen in one corner and outlets for cell phone charging plug-in. 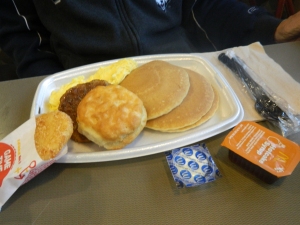 On cool, crisp autumn mornings or in the cold winter a.m. when the fireplace is on, this an especially appealing low-cost place for breakfast. McDonald’s just started offering all-day breakfast, a nice menu enhancement to respond to Americans’ apparent love affair with having breakfast out. The Big Breakfast with Hotcakes features eggs, sausage, a biscuit and jelly, hash browns and three pancakes with butter & syrup – its high calorie intake likely makes it an occasional treat. An Egg McMuffin with a tall glass of orange juice is another way to start the day. (Full nutritional data is available on the company website http://www.mcdonalds.com ).

McDonald’s reportedly serves 68 million customers daily in 119 countries at 55,000 outlets. In 2013 and 2014 McDonald’s was recognized as a Military Friendly Employer by “G. I. Jobs”, and they are a longtime sponsor of Ronald McDonald Houses assisting families with sick children.

The move to McCafes has kept the nation’s largest fast food hamburger chain in step with the times while retaining affordable prices and, of course – their golden arches.