The Old State House stands in beauty and dignity on the west side of the Connecticut River, the “high land side” in Hartford, Connecticut. Declared a National Landmark in 1960, it remains a constant, greeting visitors to the capital city. 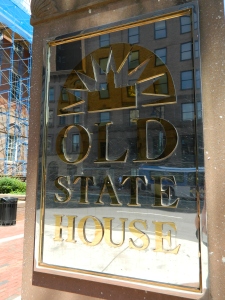 Blue scaffolding currently engulfs this historic building as it undergoes exterior renovation and roof repair. However, the building is open for touring.

Construction of the original meeting house dates back to 1636, one year after the first settlers arrived in what would become a colony which quickly outgrew that earliest structure as noted on the Old State House website. Following a fire in 1792, it was rebuilt. Visit http://www.cga.ct.gov/osh/timeline.asp to view a full timeline.

Believed to have been the first public building designed by an architect named Charles Bulfinch according to online sources, the ground level story is brownstone from Portland, Connecticut. The second and third stories are “brick patterned”.

Although the exterior is Federal style, inside the Representatives chamber is described as Victorian while the halls and courtroom are Colonial Revival. Owned by the city of Hartford, the Old State House is now managed by the Office of Legislative Management of the Connecticut General Assembly under a 99-year lease.

A brick plaza and wrought iron fence surround the structure which is the site of the state’s oldest farmers market, established in 1643 by a decree. Farmers markets are still held here on Tuesdays and Fridays, 10 a.m. – 2 p.m. from late spring to mid- autumn. As well, the building is used for exhibits, perhaps the most famous one was a daylong exhibition of a copy of the original Declaration of Independence in 2011.

There has been talk of the Old State House being haunted. The verdict is still out on that question after a visit from the Sci Fi Channel’s TAPS in 2009 reportedly recorded “strange” yet inconclusive audio sounds there. The program is expected to return at some point to further investigate the building for paranormal activity.