At the risk of sounding perpetually sentimental, I couldn’t help but think of my father yesterday when American Pharoah won the Triple Crown in thoroughbred horse racing at the 147th Belmont Stakes. So many elements kept bringing my thoughts back to Dad. 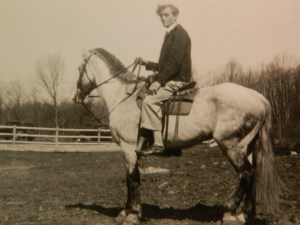 Dad/Big Johnny on horseback. He grew up on Sunny Crest Farm in Upstate New York and would have enjoyed watching American Pharoah win the Triple Crown.

With an opening salvo for the playing of Frank Sinatra’s “New York, New York”, the one and half mile long Belmont took place in Elmont, New York one day after the anniversary of my father’s June 5th birthday. My dad was originally from Upstate New York. He grew up on Sunny Crest Farm with a sable of horses on the property and an accomplished equestrian for a mother, so he very much appreciated these fine animals. He loved to ride and took my sister and I horseback riding whenever possible (she shares his affection for the sport). 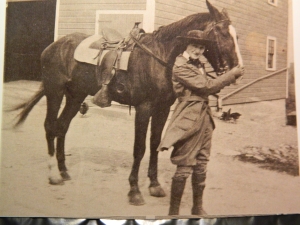 In her younger days in Upstate New York, Gram (Bessie Reeve Bennett) was an accomplished equestrian.

Plus, the last time I saw a Triple Crown winning race Secretariat was rounding the track – I watched that race with my father. He was sitting on the edge of the ring chair in the family living room eating a bowl of cereal as he often did when a sporting event was on the television, except of course his beloved Red Sox which as I’ve mentioned before he viewed with what he called his “crying towel” by his side prepared for them to lose.

Yesterday’s race was exciting, to say the least. It had been thirty-seven years since the last Triple Crown winner, even though two more horses won it after Secretariat took the title in 1973.

American Pharoah joins an “elite” group of colts that have won – the one and one fourth miles Kentucky Derby, the one and three sixteenths miles Preakness and then the longest of three, the Belmont. The three-year-old colt burst out and led all the way, coming in with a time of 2:26.65 minutes.

What especially pleases me is that American Pharoah is described as having a “sweet” disposition responding positively to being fed a carrot and the stroke of his snout, unlike many race horses that apparently try to bite when approached. As well the commentators complimented his handlers for having “graciously” said “yes” to requests for interviews as American Pharoah became the frontrunner. In that spirit of graciousness I know Dad – who lived by an old-fashioned code of honor of good manners and personal integrity – would have enjoyed seeing that sometimes a ‘good guy’ does finish first!