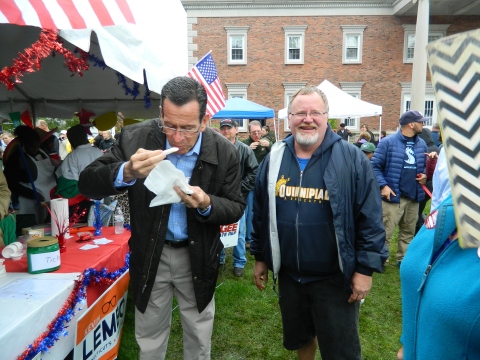 Photo by Jacqueline Bennett  “Um, it is good” … Gov. Dannel Malloy gives his approval to the chili made by fellow Democrat, Mayor Don Trinks, as the mayor looks on during the 2014 annual Chili Challenge held October 11 in Windsor, Connecticut.

Democrat Governor Dannel Malloy and his GOP opponent in the gubernatorial race, Tom Foley, both made campaign stops Saturday, October 11 at the 2014 Chili Challenge in Windsor, Connecticut. Malloy and Foley are in a neck and neck contest and also face Independent candidate Joe Visconti.

With the November election  mere weeks away, soon enough voters will know who ran on the ‘hottest’, that is the winning ticket. Yes, that is an unabashed chili pun.

“Um, it is good,” Malloy said as he took a bite of the highly recommended chili made by Windsor Mayor Don Trinks, a fellow Democrat and owner/general manager of Bart’s Drive-In Restaurant.

Trinks pulled double chili duty for the annual cook-off, in its 19th year and put on by the Windsor Chamber of Commerce. In addition to preparing his traditional recipe for the Bart’s booth, Trinks teamed up with Carol Engelmann, owner of The Beanery @ Bart’s, to create another selection with a different flavor for the Democrats.

“Carol and I teamed up for a Southwestern Chili at the Dem’s booth,” he noted.

No Windsor Chili Challenge would be complete without the ever creative participation of Enita Jubrey, a multiple trophies winner. Jubrey has competed for 18 years. Collaborating on booth themes with Darci D’Aleo, a 14 year participant, for the second consecutive year

Len Swade and company at the Windsor Democrats booth scooped out a cup of chili for Gov. Dannel Malloy.

they took 1st Place for Best Booth with their “Have Smores Chili” entry, sponsored by D’Aleo Design. 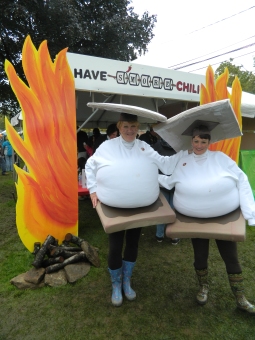 1st Place for Best Booth Enita Jubrey and Darci D’Aleo – whose costumes could be ‘smores’ clever?

And, how do they keep coming up with fresh ideas?

“Enita is the brains behind it,” said D’Aleo.

Bob Houle, a past chairman of the event was roaming the green sampling various submissions.

“This one from the radio league is good, different,” said Houle, referring to the Vintage Radio Museum.

Although the Wilson Fire Department is usually called upon to put out flames, on this day their chili was helping to heat things up. Meanwhile, Paragon Team mentor George Petro noted humorously that the robotics students made their entry with “technological and mathematical precision.” 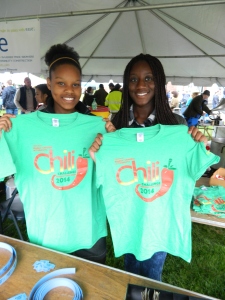 Carol Engelmann and team at the Bart’s Booth. 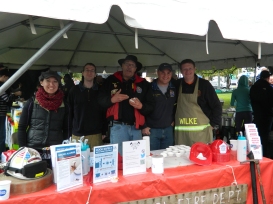 About thirty teams competed, according event organizer, the Empress of Chili, Lori Hartmann. Each year the Chili Challenge is held on the historic Windsor Town Green the Saturday before Columbus Day, with competitors dressing up in costumes to match the theme of their booths. The 2014 presenting sponsor was Windsor Federal Savings.