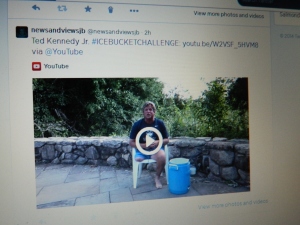 Thanks to Ted Kennedy, Jr. of Branford, Connecticut, the University of Connecticut’s connection to the ALS Ice Bucket Challenge has reached UConn’s top administrator. An alumnus of the UConn School of Law and candidate for state senate, after accepting the ALS Ice Bucket Challenge from his friend, news anchor Dennis House of WFSB, Kennedy in turn called out UConn President Susan Herbst.

The challenges were reported on The Laurel, as well as, on social media where the charitable effort went viral in the United States earlier this year.

Doused by the new “hungry-looking” Husky dog mascot, Herbst not only accepted the challenge but used her video of the deed as an opportunity to bring attention to medical research underway at the university. She then threw down the gauntlet to Connecticut Congressman Joe Courtney, who is said to have made a donation to the cause, her brother Jeffrey Herbst – president of Colgate University, and Gina Berreca, a professor at UConn. 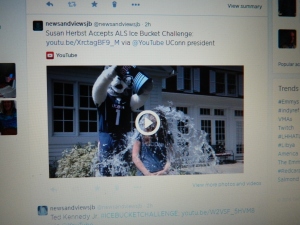 Those who are challenged have twenty-four hours to accept the challenge, then either make a donation to ALS, or have a bucket of ice water poured over their heads. Some are doing both.

According to the ALS Association Connecticut Chapter website,  amyotrophic lateral sclerosis  is a motor neuron degenerative disease affecting 5,600 people in the US each year, with an estimated 30,000 affected at any given time.

The challenge has brought attention to the disease  while reportedly raising $41 million so far, to help with research.

Head Baseball Coach Jim Penders is another UConn-ALS Ice Bucket Challenge connection. Even Husky dog mascot, Jonathan XIV, got into the fray. His handlers accepted the challenge from Mission at Northern Illinois University, then passed it along to Uga IX from the University of Georgia. 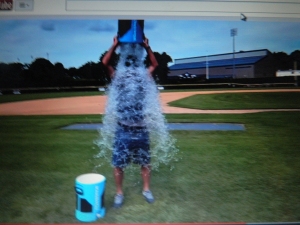 Visit the newsandviewsjb retweets below to watch UConn connections to the challenge.

If you know of any other UConn connections to the ASL Ice Bucket Challenge, please notify newsandviewsjb.com via the comment option at the bottom of this page, or via newsandviewsjb on Twitter.