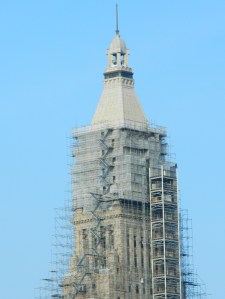 Photo by Jacqueline Bennett  Scaffolding surrounds the Travelers Tower in Hartford, Connecticut on April 13, 2014 subject of a $30 million restoration project.

Once the tallest building in New England, the Travelers Tower continues to dominant the skyline of Hartford, Connecticut. These days, however, what catches one’s eye is elaborate scaffolding that ensconses the tower, the subject of a $30 million restoration project.

Designed by Donn Barber, the thirty-four story, 230,000 square foot neoclassical style skyscraper was built in 1907, as noted by on-line architectural sources. Its crowning glory wasn’t added until more than a decade later, a 527  foot tower featuring a pyramid-like roof, complete with a cupola where a beacon is reportedly housed. Finished in 1919, the addition earned Travelers Tower bragging rights at the time as New England’s tallest building and the seventh tallest building worldwide. Today it is the second tallest building in the capital city.

It was in June 2012 that the comprehensive restoration project began. Milford, Massachusetts-based Consigli Construction Co., which has a Hartford office, was hired as the general contractor for the project. Offices in the building that is a headquarters for Travelers Insurance Co. have remained open during construction.

Characterized on the Consigli web page (www.consigli.com) as a “tight urban space” with heavy traffic, Consigli said work at the site required a complex plan of action in order to tackle the extensive scope of repair, conservation and restoration. The “phased” project includes replacement of 1,200 windows, restoration and, or, replacement of facade masonry, waterproofing, roof replacement, repair of cast iron surroundings and renovation of balconies.

Prior to the start of the restoration project, Travelers Tower was in the news as the nesting place for an endangered species, Peregrine falcons. The falcons were relocated to the Travelers Plaza.

When the restoration of the tower is done, Travelers plans to refurbish the plaza below. It is  another piece of  the city’s iQuilt plan, explained by iQuilt as a culture based endeavor aimed at pulling together destinations in Hartford’s historic district, from the state Capitol to the Connecticut River along a quick, easy walk route.

Reminiscent of New York’s Empire State Building, the Travelers Tower also has an observation deck on the 27th floor which was closed during the restoration project. Whether or not any ‘affairs to remember’ began at this spot, or ‘sleepless in Connecticut’ couples met up there remains a question to be pondered by romantics.