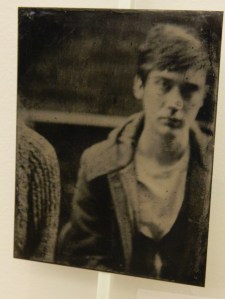 “Losing the Girl” by Amber Dietz.

A steady flow of visitors turned out Sunday, January 26 at the opening reception for the 2nd Annual Juried Photography Exhibit at the Vernon Community Arts Center in Vernon, Connecticut. The exhibit provided a cozy retreat from the chilly winter afternoon as attendees strolled about clad in coats, jackets, sweaters and wool scarves. Clearly enjoying a creative break from the frigid blast that has a grip on New England, visitors stopped periodically for closer examination of photos that caught their fancy.

One woman of Austrian heritage said she was mesmerized by an entry titled “Austrian Village.” A row of black & white photos, including one of cartoon character Betty Boop was drawing attention. Meanwhile, others such as “A Bug’s Life” evoked humor. Still others like “A Dog’s Best Friend” for some recalled childhood memories. A personal favorite of mine was the double entendre reflected in “The Drifters” by Moses Farrow  – in the foreground, an enormous piece of driftwood dominates a stretch of beach, in the distant background can be seen a group of walkers – drifters. 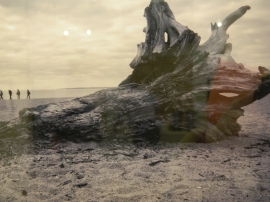 “The Drifters” by Moses Farrow.

Honors were awarded to “Losing the Girl” by Amber Dietz which took first place, second place went to “The Soul of the Road” by Tania Palermo and third place to “Old Mill Dock” by Tom Fearney. There were three honorable mentions “Gumby Listens to the Ocean” by Michael Simonds, “Be” by Susan Thibodeau and “Aspens” by Judy Grabowicz. These were selected from about two hundred entries. 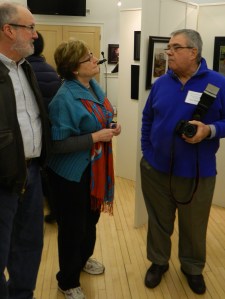 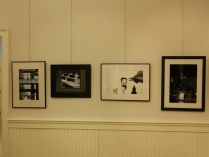 A row of black & whites.

Songs and guitar music were performed by Rosemary Toth & Mark Cadman. The jurors were Bruce Dunbar and Peter Glass.

Vernon Community Arts Center is located on 709 Hartford Turnpike. Admission to the exhibit is free and it continues through to February 22. Gallery hours are Thursday-Sunday,   1 p.m. to 5 p.m. This is an opportunity to enjoy the talent of area photographers in an exhibit just getting its wings.