Looking dapper in a black suit and dark blue shirt accented by a bolo tie, World War II veteran Earl Colebut was welcomed back at Bradley International Airport last Saturday night by about thirty fellow members of the Mashantucket Pequot Tribal Nation. Family and friends turned out to greet Colebut who was among 100 veterans, who took a Day of Honor trip on April 27 to visit the WW II Memorial and other monuments in Washington, D.C.

The soft-spoken Colebut said he served in Germany during the war. As is typical of veterans of his era, rather than elaborating on his wartime experience, Colebut described himself as a man of peace not violence and spoke of the senselessness of the recent bombings at the Boston Marathon.

For Colebut’s grandson, Roy Colebut-Ingram, a Tribal Councilor, his grandfather’s service is clearly a source of tremendous pride.

“This is a really proud moment, not only for me personally but for our history as well,” said Colebut-Ingram.

The Day of Honor trip was sponsored by the American Warrior project which was founded circa 2006 by Christopher Coutu of Norwich after a visit he made to the WW II memorial. While there Coutu said he noticed the absence of the veterans the memorial was built to honor. A member of the Connecticut Army National Guard himself and inspired by seven of his own family members who served in WW II, including his Great Uncle Edward who at that time was still living, Coutu returned home determined to help the warriors from America’s “greatest generation” visit their memorial, built sixty years after the war.

So dedicated to that mission was Coutu that he withdrew the last $10,000 from his savings account to pay for the first trip when funding fell short. He has since recouped that money.

“I promised them this trip and so I put everything on the line,” said Coutu, who joined the veterans on the Day of Honor trip.

The daylong trip on a chartered aircraft departed from BIA early Saturday morning. In addition to the WW II Memorial, the veterans, 99 from WW II and one from the Korean War, were scheduled to see the Korean, Air Force, SeeBee, Vietnam, Marine, Navy and Women’s Memorials. The American Warrior project pays the trip cost for the veterans who are accompanied by guardians that pay their own $300 fare. Guardians are often next generation family members or volunteers there to escort and care for the veterans, some of whom are in wheelchairs.

They returned to a glorious patriotic welcome at Bradley Airport of family, friends and the Glamour Girls belting out popular tunes from the 1940s, such as “Sincerely”, ” Don’t Sit Under the Apple Tree (With Anyone Else But Me)” and the “Boogie Woogie Bugle Boy.” BIA Marketing Coordinator Stacey Doan grabbed a sailor out of the welcoming crowd and proceeded to dance up a storm with Seaman Cameron Slate of Knoxville, Illinois. Slate and his buddies, who are studying at the Naval Submarine Base located in Groton, drove up to the airport to greet the returning veterans.

As part of a patriotic welcome home for the WW II veterans, the Glamour Girls sang tunes from the 1940s. 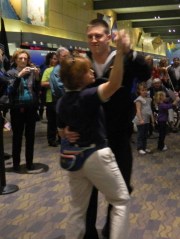 To date, thanks to Coutu 930 WW II veterans have been on Day of Honor trips. According to information provided by American Warrior, over 16 million served. Of that number, 400,000 died in the war. Presently, the average age of the surviving veterans is 85 but their ranks are dwindling – some 1.200 pass away daily. Thus far, Coutu has only a few WW II veterans signed up for the Day of Honor trip expected to take place in the spring of 2014. But he hopes more sign on. According to Coutu, his next mission will be to bring Korean War veterans on Day of Honor trips.

For more information about American Warrior and how to donate to the project go to: WWW.AMERICAN WARRIOR.US