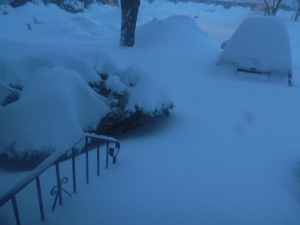 (Writer’s note-Awoke to 29 inches of snow outside at 5:45 a.m. and snow still falling. The snow is too high to open my doors so for now I’m snowbound in Connecticut.)

Early this morning Connecticut Gov. Dannel Malloy ordered all roads closed as the state continues to be pounded by a blizzard that is immobilizing parts of New England.

“The only vehicles that should be on any road right now are emergency response and recovery vehicles with capacity to maneuver in heavy snow,” Malloy twitted, “This is a record breaking storm. It’s going to take time to dig out of the snow.”

In anticipation of what has been dubbed Blizzard Charlotte by some locally but is being called Winter Storm Nemo on the national level, Malloy declared a state of emergency last night and ordered limited access roads closed, those being highways such as I-95, I-91, I-84 and the Merritt Parkway. According to Malloy, he coordinated highway closure decisions with the governors of  the bordering states of New York and Rhode Island. As well, Malloy put CT National Guard troops on alert to assist stranded motorists if need be.

Comparisons are being made between this storm and the Blizzard of 1978 that brought Connecticut to a halt for days.

Check a future newsandviewsjb for more Blizzard of 2013 photos – assuming that I can eventually shovel my way out.