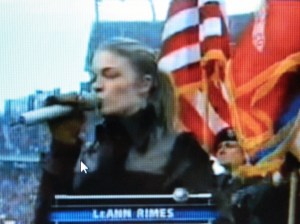 Some are heralding a “bluesy” rendition of the USA national anthem “devoid of lip-syncing or lyric flubs” at yesterday’s Super Bowl game in New Orleans. My preference is a couple of outstanding performances of the “Star-Spangled Banner” delivered by country artist LeAnn Rimes. One in 2004, aptly described as “stunning”, was before the start of a NFL Patriots/Colts game and another in 2011 at the NCAA Men’s Basketball Tournament. Both are available on YouTube.