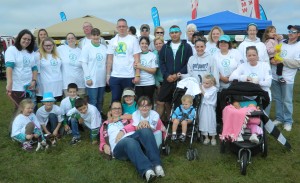 Far exceeding their goal, Natalie’s Tigers took the top fundraising spot with $8,384 raised for the 3rd Annual 5K Run/Walk to Break the Silence on Ovarian Cancer held September 22 at Hammonasset State Park in Madison, Connecticut. About seventy participating teams raised a total of $102,465 to help fight the disease that reportedly kills nearly 14,000 women annually in the United States.

In addition to exceeding their monetary goal of $500, the thirty-eight member team 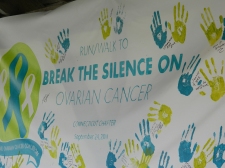 of Natalie’s Tigers also surpassed a goal of recruiting eight members. As well as accepting pledges, the group held lollipop sales, lemonade stands, bake and tag sales, and even collected cans and bottles for the cause.

“It’s really cool, our team is the biggest,” said a joyful Natalie Cosman of Manchester, Conn, who at just eight years old is an ovarian cancer survivor.

Having been through surgery and still undergoing treatment, what a difference a year has made for Natalie. Her brown hair is growing back and the future looks brighter.

“Everybody here has been by our side since day one,” said Melinda Cosman, Natalie’s mother.

Natalie Cosman with her best friend Riley and sister Sammy.

Asked about her reaction to Natalie’s diagnosis a little over a year ago, Melinda Cosman said, “What can you do? You have to keep going each day. You’ve got to keep up the fight.”

As for the impact on Natalie’s sister, Melinda Cosman said she made a point to also give “Sammy” attention. “I made sure of that.”

Natalie’s  father David Cosman, serves in the Connecticut National Guard and works in security. He took time off to be with his daughter when she was so sick but does not like to discuss the financial hardships, preferring instead to express his gratitude to the hospital and the doctors.

“They have been terrific,” he said.

“I wanted to be part of this to support Natalie,” said Kyla.

An eight and a half year survivor, Joanne Nesbitt of the Conn. Chapter of the National Ovarian Cancer Coalition – NOCC. recalled when she was diagnosed in 2004 there was nothing here in Connecticut.

According to its Facebook page, the Conn. chapter was “re-established” in 2009. 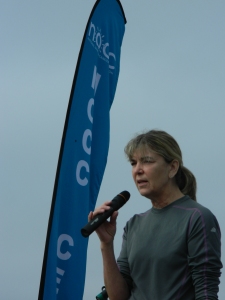 Punctuated by both triumph and sorrow, the run/walk took place along a beautiful stretch of beach at Hammonassett State Park. At one point, Nesbitt was joined on the stage by some participants as they danced to the song, “I will Survive” sung by her daughter, Trisha Calhoun and three others from the Loving Faith United Methodist Church choir.

Especially emotional was a presentation to Nesbitt on behalf of the NOCC of a check for $5,000. from the Wicked Fly Monkeys team, led by Danielle Payne who lost her mother to ovarian cancer six months ago. Choking back tears, event emcee John Morris, vice president of the Rhode Island Chapter of the NOCC, also noted four years had passed since he lost his 20-year-old daughter Jessica to the disease.

Dr. Molly Brewer, an oncologist at the University of Connecticut Health Center, took part in the run/walk with a team of  doctors and nurses. She offered words of determination and hope through medical research. Later, all the survivors joined together for a butterfly release.

“For awhile it was crazy. But now that we’re past the hard part, it’s like a weight has been lifted,” said David Cosman.

According to the NOCC website, more than 20,000 women in the U.S. are diagnosed with ovarian cancer each year. If caught early, it is 90 percent treatable. The mission of the NOCC is to raise awareness about the disease, promote education, and to improve survival rates and quality of life for women with ovarian cancer.

Danielle Payne, who lost her mother Lydia Gagnon to ovarian cancer six moths ago, leaves a message on the Memory Wall.