Lieutenant Governor Nancy Wyman led the celebration of Connecticut Day September 19 at the Big E in West Springfield, Massachusetts. Arriving at the Nutmeg State building on the Avenue of States around 2:30 p.m., Wyman was greeted by Sgt. Jeff Samonajczyk and other members of the Connecticut Environmental Conservation Police. Wyman spent the better part of the afternoon mingling with exhibitors and constituents before taking the podium on a stage out front to address the crowd. 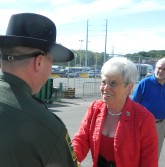 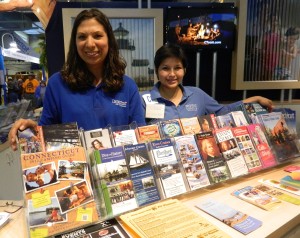 Jilline Gonzalez and Rita Rivera welcomed visitors to the tourism counter at the Connecticut building.

Gene Cassidy, first year president of the Eastern States Exposition – nicknamed the Big E – spoke too as part of  pomp and circumstance that also featured the governor’s guard at attention along the front walkway for the playing of the national anthem. That proceeded a kick-off of the Connecticut Day parade led by Wyman. A slight delay in the start gave her a chance to step out of parade formation and shake hands with spectators.

“Nancy is everywhere,” said Master of Ceremonies and Connecticut broadcaster  Brad Davis, in his 25th year as emcee of the event.

Paying homage to the national anthem.

On a somber note, Davis who is a friend of Wyman’s, praised her for initiating a Wall of Honor at the state Capitol in Hartford to memorialize  Connecticut military personnel killed in the wars in Iraq and Afghanistan.

Connecticut building on the Avenue of States

Inside the Connecticut building, which is a state house replica, Wyman chatted with Craig

United States military aircraft to achieve 400 miles per hour in level, Corsair was designed to use the “largest available propeller, while keeping the airframe as small as possible.” During the height of World War II production, a Corsair is said to have been produced in Stratford, Connecticut “every 55 minutes.”

Corsair is now the centerpiece of a “restoration through innovation and education” project explained McBurney. Involving Connecticut students in rebuilding of the Corsair, the project aims to attract students of all ages into the state’s engineering and manufacturing workforce. Educational programs connected with the Corsair project include, Sikorsky Aircraft Innovations High School STEM Challenge, Connecticut NASA Space Grant Consortium, CT First Robotics and the University of Connecticut School of Engineering Senior Projects.

“The lieutenant governor is a big supporter of STEM. She invited us to an event with fourteen high schools at Chester Airport on the 27th, ” noted McBurney.

The Glamour Girls of Hartford on stage for Connecticut Day at the Big E.

To benefit CT Wounded Warriors project, a handcrafted quilt being raffled off by the New England Grange.

Over at the New England Grange building, a handcrafted quilt was being raffled off to benefit the CT Wounded Warriors Project. According to grange members, Bob Brockett of  Granby, Conn. and Richard DeCosta and Charles Martin of Worcester,Vermont, this is the eighth consecutive quilt raffle to help various causes in New England. The last one raffled for a Connecticut cause was in 2007  when $2300.  was raised for the Connecticut Children’s Medical Center, they said.

Susan Jones, author of the children’s book, “Until We Meet Again.”

Earlier in the day the Mardi 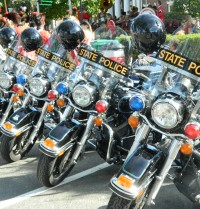 Gras Parade made its way through the fairgrounds. However, the big attraction for Nutmeggers was the Connecticut Day Parade scheduled for 5:00 p.m. 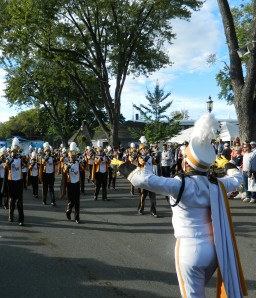 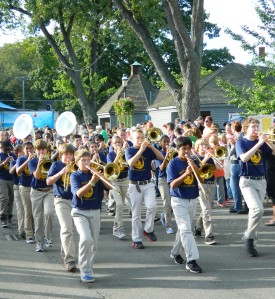 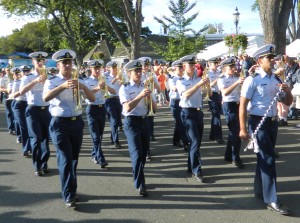 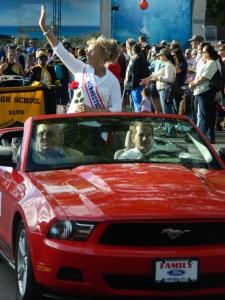