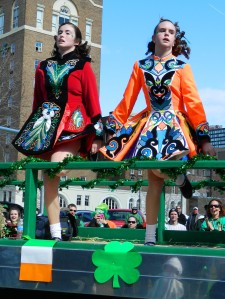 Bagpipes,step-dancers,marching band renditions of “When Irish Eyes Are Smiling” and thousands of spectators awash in green, were all part of the 41st annual Greater Hartford St.Patrick’s Day Parade held March 10 in downtown Hartford, Connecticut. The day even included an impromptu marriage proposal.

Spirits were high from the moment the two and a half hour parade kicked off at 11 a.m.at the State Capitol under sunny skies. Clad in various hues of green and lining the streets on the way to Memorial Arch, viewers came prepared for crisp, yet comfortable, temperatures in the 40’s.

the Irish Person of the Year. Governor Dannel Malloy, his wife Cathy Malloy, and Lt.Gov.

Step-dancers from the Mulcahy Academy of Irish Dance and the Griiffith Academy were among those who entertained the crowd, as did high school marching bands from throughout the region.The Windsor Fife & Drum Corps and Manchester Regional Police & Fire Fife Band took part. As usual, labor unions had a strong presence in the parade and received applause as they passed by. A real crowd pleaser was the float by the International

depicting pole workers repairing high wires. Korean War veterans also marched and as is their tradition they carried a sign which read “Freedom is Not Free.” 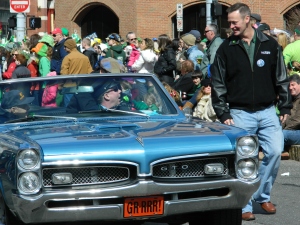 Staff Sgt.Danny Nolan,a longtime Hartford firefighter, greets vehicle Frank Droney is riding in – Droney is one of the last surviving firefighters who battled the Hartford Hospital fire in 1961.

On leave from duty in Afghanistan, Staff Sgt. Danny Nolan of Windsor, a longtime Hartford firefighter, surprised his colleagues greeting them on the parade route. Before passing away, Nolan’s father retired from the HFD as deputy chief and was a co-founder of the Hartford St.Patrick’s Day Parade. Nolan said he was especially glad to be able to attend this year because the HFD chose the event to honor Frank Droney, who rode in the parade. According to Nolan, Droney is among the last surviving firefighters who responded to the Hartford Hospital fire 51 years ago, which resulted in changes in hospital safety procedures and building codes throughout the nation. Droney fought that fire side by side with Nolan’s father whose company was the first to respond.

“Frank Droney and my father grew up together in Ireland and emigrated to the U. S.at the same time.They joined the army together and both fought in Korea and when they came home they joined the Hartford Fire Department,” he noted.

Kara Sundlun and Denise D’ascenzo wave to the crowd

The parade featured several on-air personalities from WFSB, such as anchors Denise D’ascenzo, Kara Sundlun and Dennis House. However, none appeared to be more popular on this day than weatherman Mark Dixon who reacted with a smile when he received an impromptu “shout out” marriage proposal along the way. The proposal came from Erin who identified herself as a schoolteacher.

How serious was she? “Very serious,” she said. If Dixon is interested, how can he let her know? “Report the weather is going to be HOT!,” Erin said,laughing.

The parade was put on by the Central Connecticut Celtic Cultural Committee.

Candy and Dixie enjoyed the parade