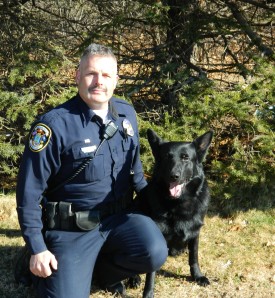 The tougher the competition the more motivated Officer Steve Vesco is to excel. So, it should come as no surprise that even now Vesco and his K-9 partner, Iko, are preparing for a police dog competition that is months away.

Already an award-winning K-9 team, Vesco and 4-year-old Iko will head to a Region 4 event this summer, described by Vesco as “extremely competitive and very strict.” So stringent is the judging that a slight nod of the head or small hand movement can be interpreted as a double command from the canine handler, which would result in being marked down. In competition there is no room for error, the expectation is that teams arrive ready to perform at the highest levels, noted Vesco. That is just fine with this 18 year veteran of the WPD who served as a Marine in the Persian Gulf War.

“The less commands, the better. It is very strict, there are a lot of rules,” Vesco said during a recent interview at the Public Safety Complex in Windsor.

A year after Iko, a handsome-looking, solid black, pure bred German Shepard became Vesco’s partner, the pair began training for their first competition. In 2010, they triumphantly walked away from the United States Police Canine Association  Certification Competition, held in Worcester, MA, with a first place trophy in the novice division. 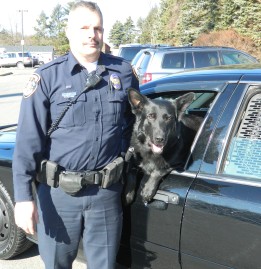 “That represents first place overall,”Vesco said,”We also took first place in obedience, first place in apprehension and third place in suspect search. We ended up coming away with four or five trophies.”

In 2011, Vesco and Iko fared well again competing in Merrimack, New Hampshire in the open division.

“It’s a whole different field, very, very tough – an even higher level of competition. I couldn’t believe it, I was floored when we took 4th place overall,”Vesco recalled.

Their success did not stop with that award. Teamed with Joel Wun, a sheriff in Ludlow, MA who is also one of Vesco’s trainers as a handler, and two officers from Manchester, New Hampshire, they placed first as a Four-Man Team.

“That is very prestigious,”Vesco explained, adding, “that was exciting.”

Working police dogs must  be recertified every year but participation in competitions is not required. Although it demands extra hours of training, Vesco says -first and foremost- competing keeps Iko’s skills top-notch, and the awards strengthen his credibility as a police canine. As well, Vesco said he is proud to be able to represent the department and state.

Being half of an award-winning K-9 team is nothing new for Vesco. Iko is his second K-9 partner and the dog had some big paws to fill, following behind the legendary Jag. As Vesco’s K-9 partner for 10 and a half years, he and Jag stacked up award after award not to mention a stellar record in police work throughout north central Connecticut as part of the regional SWAT team. They put in countless hours of public appearances and visits. After being retired from the WPD, Jag passed away but was so beloved by the community that he is immortalized by a statue on display in the lobby of the Public Safety Complex.

Three years after coming on board at the WPD, it was Vesco who approached the department’s top brass about re-establishing a K-9 unit. Subsequent to losing Jag, Vesco recalled he was approached by colleagues who encouraged him to take another K-9 partner, but he needed some time. Eventually, Wun introduced Vesco to Iko, at the time still a puppy that had just arrived from the Netherlands. Vesco felt a connection with the pup, he said, and was impressed with Iko’s demeanor and intelligence.

Aware of the time commitment involved in training a police K-9 and the fact that Iko would be living with Vesco, he introduced the dog to his wife and two children. The meeting went well, so Vesco decided to pursue acquiring Iko from Wun for the WPD. According to Vesco, that was made possible by Wun’s generosity in keeping the cost down and a grant from Milk Bone and the local Price Chopper grocery store.

Vesco initiated early training of Iko with Doug Humphries of East Windsor which evolved to training with Wun. Now, Vesco and Iko are one of two WPD K-9 teams; the other is Officer John Simon and Kane.

Not long ago, Iko reached a milestone and became a papa. Iko was bred and fathered nine puppies, each of which is spoken for and have homes.

On the immediate agenda for Iko is passive gunfire training – whereby, canines learn to stay calm when shots are being fired. The most challenging part of training, said Vesco, is maintaining consistency and staying on top of the large number of tactical maneuvers in different environments. Due to the time involved, Vesco opted not to continue with SWAT.

Training and working with a police K-9 can be extremely rewarding, Vesco pointed out. “Catching the bad guy, finding narcotics” and “seeing an inexperienced dog and bringing him up to where you go to a demonstration and people ask ‘how are you able to do that?’.”

“Iko is always in a good mood, loves kids and is very social,” Vesco said, “He is my shadow.”