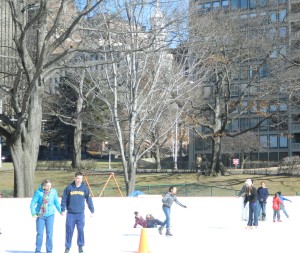 Popularity of the iQuilt Winterfest skating rink in downtown Hartford, Connecticut continued through to its closing day on February 20. During the 2011-2012 season, it attracted an approximate 50,000 visitors – since the November 25 opening.

Stephanie and T'nya look forward to getting on the ice

From novices who grasped the rink’s edge as they navigated around the ice to those gliding along with ease, skaters turned out on Monday to take advantage of the final hours of the free activity. It was made possible through a combination of money from the city, corporate and private sponsors, and donated skates. In its second season, attendance at the rink located in Bushnell Park, is said to have been up a whopping 30,000, from the inaugural 2010-2011 season. As well as local residents, skaters came in from surrounding suburbs. 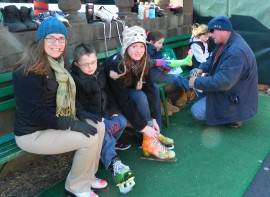 For the Lee  family from Southington – Jessica, Ryan, McKenzie, Abigail, Scott and Caroline -Monday’s outing was their fourth time using the rink. T’nya and Stephanie, both 11 and both from Hartford, had also been to the rink several times this winter after learning to skate there last year. A woman from Massachusetts noted she came upon the rink while in town to see her son who works at a Hartford insurance company. She was back for her second day of skating.

“We have fun,” agreed T’nya and Stephanie.