Sealed with a kiss! Pat and Mike Kuszik renewed their wedding vows.

Cupid hit his mark February 14 in Windsor, Connecticut helped by a 50 year tradition of free Valentine’s Day marriage licenses offered by the Town Clerk’s Office in Town Hall, where seven couples wed and two couples renewed their vows. Others who received free marriage licenses in Windsor over the past 50 years turned out as well for a special reception to commemorate the golden anniversary of the license give away.

Last Valentine’s Day Ruff and his wife Erin got married here, following in the footsteps of her parents, Windsor Fire Chief Bill Lewis and his wife Rita, who took advantage of the free license 35 years ago. Then couples scurried to be the first ones in the door in order to get a host of complimentary items that came with that first free license of the day, recalled Bill Lewis. At that time, however, a waiting period was required before marrying and Bill and Rita waited until March to get hitched. However, with the waiting requirement no longer in place, Troy and Erin decided to tie the love knot on the spot last year.

Bill & Rita Lewis with their daughter and son-in-law, Erin and Troy Ruff

Fire Chief Bill Lewis and wife Rita hold their photo from 35 years ago.

“We gave everyone two hours notice and afterward headed over to Union Street Tavern and we plan to do the same thing today – head over to the tavern,” noted Erin Ruff.

Heather Wlochowski and her husband Joseph Martin, of East Hartford, got their free license and wed at Windsor Town Hall ten years ago with their then 3-year-old daughter Hannah as flower girl. She was with them yesterday.

“I remember I wore a red dress,” said Hannah.

Gerlie and Ron Bell,  got a free license and married on Valentine’s Day here three years ago after a mandated 90 day wait because of Gerlie’s visa.

“We married that day. I had brought her to the U.S. on a fiancee visa from the Philippines,” said Ron Bell, “We read about the free licenses in The Reminder.”

They now have a son, Phillip, and a special memory. “Valentine’s Day has a double meaning for us,” they agreed.

Pat Kuszik’s, who works at Town Hall and her husband Mike Kuszik’s 1966 Valentine’s Day license snapshot was part of a 50th Anniversary photo collage on display. Officiated by Justice of the Peace Anita Mips, they renewed their vows on Tuesday standing close to that photo.

Thinking back to 1966, Pat said, “We got married the following Saturday at St. Gabriel’s.”

According to Pat, she and Mike went for the free license because her father was friends with George Tudan, the Windsor Town Clerk who began the tradition in an effort to garner attention for his re-election bid. Back then, town clerk was an elective office.

Tudan was Betsey Lepak’s father so for her, there was never any doubt she would go for the free Valentine’s Day license.

“I knew before anyone proposed to me that because of my dad, I wanted to go for the free license,” she said.

The proposal she wanted from her Windsor High School sweetheart came in 1977 but  her father tried to stop the marriage from happening, the Lepaks remembered.

“He found out I planned to propose on Christmas Eve. I had long hair and was on the road with a band,” noted Peter Lepak, “I told Betsey and she said, ‘give me that ring’. ”

“I felt it was our lives,” Betsey said.

The Lepaks point to their 1977 photo with her father

Nonetheless, when the day arrived for Betsey and Peter to pick up their license, her dad was there to kiss Betsey on the check. Peter kissed her on other check, creating another of the photos found in the collage. They too renewed their vows.

New memories were made for other couples.

Malcolm Freeman, Jr. and Michelle Palmer of East Hartford said they were pleased to become part of Windsor’s town history. Michelle’s mother Gwendolyn Palmer, was among relatives there to share in the young couple’s joy.

After exchanging their vows the newlyweds listened to the Lepaks and Kucziks share advice about what makes for a happy marriage – they spoke of forgiveness, flexibility and maintaining a sense of humor. All the couples concurred a Valentine’s Day marriage makes for an easy to remember anniversary.

A gift basket from Town Clerk Agnes Pier for the bride, Michelle Freeman

It was noted that this was the first year when every couple who got a free license also got married right away. Each couple received a complimentary gift basket of goodies thanks to local merchants and there were refreshments, including a heart shaped cake. The team that put the day together without a hitch – well with several happy hitches – includes Town Clerk Agnes Pier, Deputy Town Clerk Anna Posniak, Pat Kuszik and Deb Bouvier, administrative clerks for the town clerk, and Enita Jubrey, assistant to the town manager. 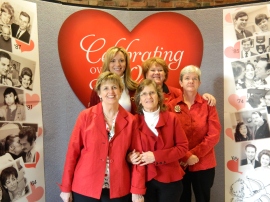