Is Scrod Even A Fish? On a Memorial Day Weekend Quest for Low- Fat Foods 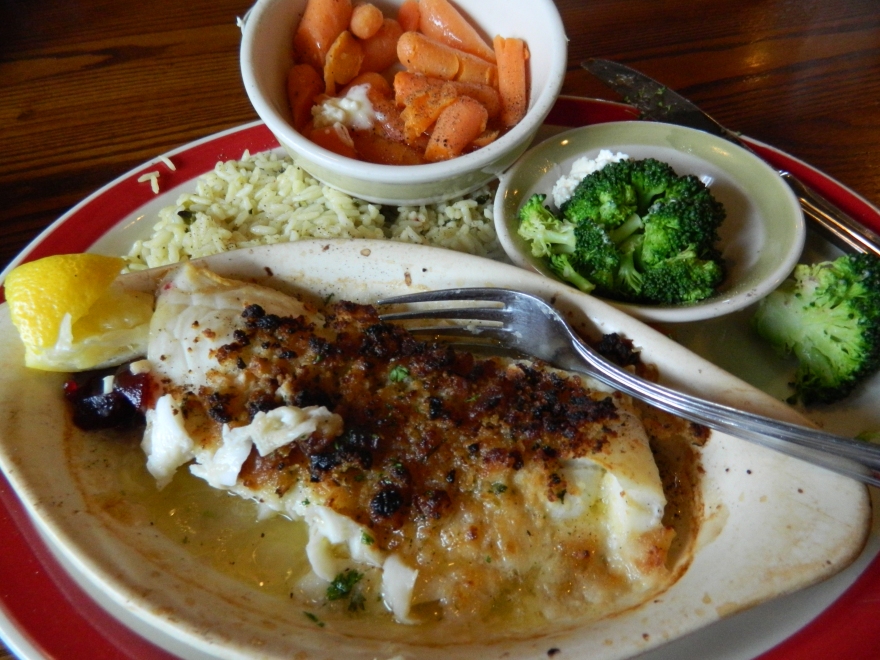 With Memorial Day Weekend upon us and due to my own health considerations, I refreshed my memory researching low-fat foods and found a favorite of mine at the top of the list – scrod. There is disagreement, particularly in New England, as to whether or not schrod or scrod is a fish at all or merely an acronym begun by the Parker House in Boston, MA. standing for ‘select catch received of the day’ ?

As such, scrod can be cod, haddock or other white fish. That certainly would have been news to me back when I first ordered scrod which has become one of the dishes I most enjoy. For that first scrod dinner, I was out to eat with Aunt June who was my father’s sister, my parents, my sister Candy and niece Debbie at a fine restaurant in the Boston suburb where my aunt lived at the time – if I have written about this before please indulge me the repetition.

Were one to ask what Aunt June liked making best for dinner, the answer would be reservations! HA ! Although she was actually a good cook, the kitchen was far from the place she wanted to be. We spent a lot of time with Aunt June in Stoneham, thus Dad or Aunt June treated us to many a meal at lovely restaurants in the area. It was dining in those Boston-area restaurants that I developed my taste for excellent seafood, baked stuff shrimp, shrimp scampi, hot lobster served with salad topped with light dressing and,or freshly steamed vegetables.

Turns out fish can be some of the healthiest food choices, lucky me. That said preparing them at home, they do not typically come out as good as when a professional chef does the deed. I have sufficiently digressed from the topic at hand – choosing low-fat foods for your health which can be especially challenging on holidays.

Health experts suggest picking white lean fish, chicken breast,or for those times when nothing but a burger or steak will satisfy pick low- fat red meat trim it or buy it that way. If you are a soup person as am I – choose broth-based soups – that means for me switching from my beloved New England Clam Chowder made with milk to Manhattan or Rhode Island Clam Chowder.

Pick cruciferous veggies fresh or frozen to avoid salt such as broccoli, cauliflower, brussels sprouts, cabbage, turnips. There was much discussion of the value of consuming ancient grains which I will name here but I have not yet tried them – fargo, bulgur, spelt or quinoa. I’m thinking for now whole grains are a good choice yet white grain does digest more easily. Leafy greens are another good option spinach, kale, collard greens and romaine lettuce – the latter I enjoy in a Caesar’s Salad.

Beans and legumes are said to be a good low-fat option. Sweet potato. Mushrooms and garlic can add flavor to low-fat meal. Fruits are one of the best low-fat foods but if you have special digestion issues like GERD be careful to pick smooth fruits like blueberries or bananas. In various on-line sources Tart cherries, were singled out for rave reviews in that they are fat-free and ant–inflammatory.

Be careful about too much dairy. With Memorial Day being the unofficial start of summer  it can be tempting to order a milk shake. Think twice or three times before doing that. Instead reach for low-fat or skim milk, and both low-fat yogurt and cottage cheese.

I hope this low-fat refresher helps make your holiday healthier and happier !