Refrigerator Bread & Butter pickles from her great-granddaughter Kathleen have been added to Mom’s Recipe Box.

Pickles are most definitely a passion of mine. Half Sour, Dill, Kosher – I love them all. Except the Bread and Butter pickle is just something special. It’s a guiltless snack that can be gobbled up so quickly; of course when I looked at the two cups of sugar that goes into pickle juice … I’ll try to only have a couple slices at a time.

But it’s always about the memories that we have with food, Grannie, Muriel Bennett Lucas, had the same adoration for pickles that I do. We would open a jar of pickles (it never mattered what kind!) and watch television in the summer, and when the pickles were gone – I’d drink the juice.

I don’t much recall making pickles growing up, and every time I made the slightest attempt to – I would forget and the cucumbers would go bad. Although Sunday morning I was scrolling through Facebook and I noticed this exact recipe for Bread and Butter Pickles. I knew I had white vinegar and I was sold. Of course I still had to get the rest of the ingredients. Except once I have those, I’m set for a while. So while Evan, my fiance, is baking his chocolate chip cookies, I begin slicing the cucumbers. The time of preparation that goes into this recipe does not seem long … but when you are waiting for something as delicious as homemade Bread and Butter pickles, 1 hour can be treacherous.

And the 24 hours of chilling afterwards – let’s just say it’s a good thing I was working over-time today! I would have been itching to open the fridge all day!! Once I was finished heating up our leftover ribs, baked beans, and coleslaw – I officially cracked that first jar open. It is the most heavenly experience I have ever had making something with my own two hands. And I am proud to share it with everyone. Bread and Butter pickles for everyone forever! – Kathleen Miller 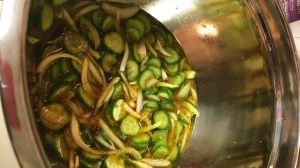 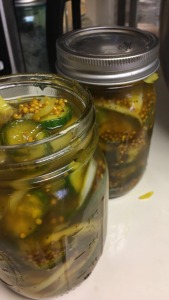 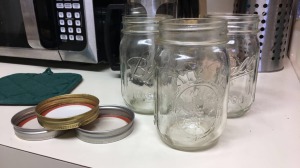 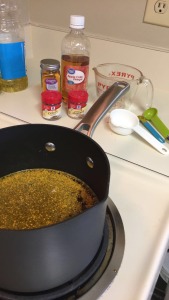 *My niece Kathleen writes her own food blog https://sweetlysavory.tumblr.com/ – this recipe also appears on her blog.

Look for Mom’s Recipe Box as an occasional feature on newsandviewsjb as family members add to and celebrate my mother’s collection of recipes – the Cecelia G. Bennett collection – JB