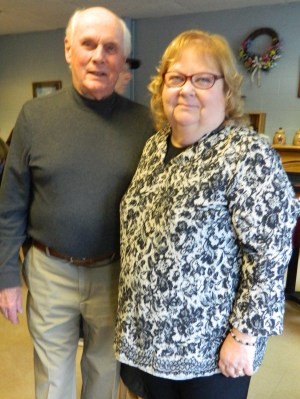 Jane Garibay is pictured Thursday, April 19, 2018, with Neal Cunningham ~ former chair of the Windsor Locks Democrat Town Committee during the kick-off to her campaign for the 60th House District.

Honesty, Integrity, Common Sense & Bridge-Building. These are the hallmarks of the Jane Garibay for House campaign that kicked-off last evening at Bart’s restaurant in Windsor, CT. They are more than mere words to Garibay ~ honesty, integrity, common sense and bridge-building ~ are the standards by which Garibay lives her life and has conducted herself during years of public and community service, as attested to by a large turnout of supporters.

“I’m a bridge-builder,” said Garibay, a Democrat seeking the nomination to run for the 60th General Assembly District comprised of a part of Windsor and Windsor Locks.

“I am really excited to do this,” Garibay said, citing her background working for education and her knowledge of business. Speaking about the challenges facing small business, she noted, “I know how they bleed.”

Garibay was introduced to applause by Windsor Mayor Donald Trinks, owner and general manager of Bart’s restaurant. Creation of good jobs, healthcare needs, education, and special education are critical issues she pointed to, as well, she has cited taxes and transportation as key concerns.

Having served three terms as chairman of the Windsor Board of Education, 2001-2006, those who know Garibay are familiar with her ability to exercise detente in the face of contentious situations, bring together factions with differing views, work tenaciously and stand fast on issues when need be. As executive director of the Windsor Chamber of Commerce, a position she has held for 19 years, supporters added Garibay is in tune with the pulse of the people, infusing energy and fresh ideas into the community.

One of Jane Garibay’s youngest supporters, one-year-old Sadie and her mother Sally Grossman. 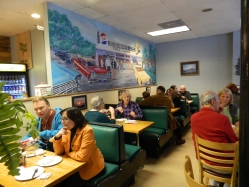 Enjoying refreshments at the kick-off. 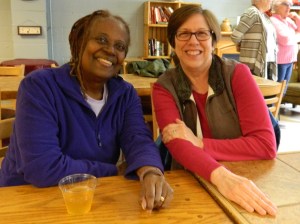 Sharran Selig-Bennett (no relation to the writer) Laurie St. Jacques and Lisa Stewart. 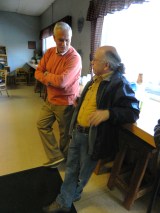 Patrick and Karen Hatcher turned out to back Jane Garibay.

Garibay says she had considered running for the seat before, but was motivated to toss her hat in the ring at this juncture because the timing feels right. She said she believes she can make a difference with the issues at hand. Given the political tenor of the times Garibay added she wants to help restore civility to politics.

“I admire her qualifications,” said Rosemary Hogan, chair of the Windsor Locks Democrat Town Committee, “She has a great background with the chamber of commerce, with education, and she has name recognition in Windsor.” Also turning out to back Garibay was former 60th district state representative Peggy Sayers, whom Garibay described as a “mentor.”

“Jane is thoughtful,” said Karen Hatcher of Windsor. She went on to praise Garibay for her experience addressing policy choices and expressed confidence that she will balance good choices for the district.

“I will always listen, ” Garibay told the crowd, promising to represent Windsor and Windsor Locks with equal ferocity. Bringing a touch of humor to the moment she added, “And I have a sister (Carol Engelmann) and a friend Sharran (Selig) who will also listen.”

*The 60th House District seat is currently held by first term Windsor Locks Republican Scott A. Storms, who is running for re-election. Kathleen Tracy of Windsor is also seeking the Democrat nomination to run.