Destination: The Lion’s Den – A Ratskeller with Winter Appeal As Snow Swirls

Listening near the tavern bar one cold December day, tales could be heard of the ratskeller below. 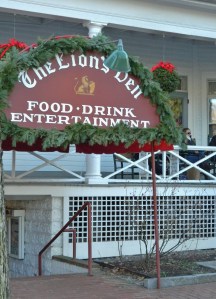 Photo by Jacqueline Bennett The Lion’s Den at the Red Lion Inn in Stockbridge, MA.

“The Lion’s Den” in Stockbridge, Massachusetts is listed as one of New England’s coziest winter bars in an article  from “Yankee Magazine.” Located beneath the Red Lion Inn,  “The Den”, as it has been dubbed, can be reached through an exterior entrance and one inside the inn’s Widow Bingham’s Tavern.

During a luncheon at Widow Bingham’s Tavern, I overheard some staff express perplexity when a server described “The Den” as a ratskeller, sometimes spelled rathskeller. It is a term at the same time intriguing and off-putting. Any word that contains “rat” is cause for apprehension.

The term has its origin in 15th Century Germany, according to what I will call bar-scholars. It apparently combines the concept of wine cellars with, well …. The oldest one cited is Bremen Ratskeller, dating to 1405.

So, what the heck is a ratskeller? Quite simply it is a basement tavern. Early on they were found beneath, or nearby city halls. Guess politics could always be cause for a stiff drink.

It was during the 1800’s that ratskellers made their way into the American vernacular. Visualize the fictional ‘Sam Malone’  pouring drinks as customers make their way down the stairs into ‘Cheers’, which was based on a real bar in Boston – the Bull & Finch, renamed Cheers after the television series reached iconic status.

Ratskellers seemingly became popular on American college campuses during the 1950’s “beatnik” era and into the 1960’s era of social revolution. Given their typically dark and reclusive aura, that fits, hideaways of sorts for folks planning to change the world. Even my Alma mater, the Univeristy of Connecticut, is included in a list of college campuses that had ratskellers during this socially and culturally turbulent period. (The “Sons of Liberty” often met in taverns to orchestrate the American Revolution, albeit they were above ground.)

Ratskellers are far from extinct and can still be found throughout the world. That brings us back to “The Lion’s Den” tucked beneath this New England inn made famous by a Norman Rockwell depiction of Christmas along Main Street in Stockbridge, a quaint town nestled in the beautiful Berkshires.

Yankee Mag makes note of the “half-flight down”, 80-year old pub’s promise of live entertainment 365 days a year, brick-red tin ceiling and rosy lighting. Add to that a key element for me, a fireplace. “The Den’s” promises too, “never a cover charge.” And thanks to the food served here, such as the ultimate chicken pot pie comfort food, it is a 2015 Open Table Diner’s Choice Winner.

Keep in mind that an underground pub does require one to navigate stairs despite having lifted a pint or two. With a hint of clandestine, clearly this ratskeller creates an atmosphere that makes it an appealing destination while outdoors snow swirls amidst the howl of winter winds.

Listening near the tavern bar to tales of the ratskeller below: The Lion’s Den at the Red Lion Inn, 30 Main Street, Stockbridge, MA 01262  413-298-5545 https://www.redlioninn.com/berkshires-dining-/the-lions-den/