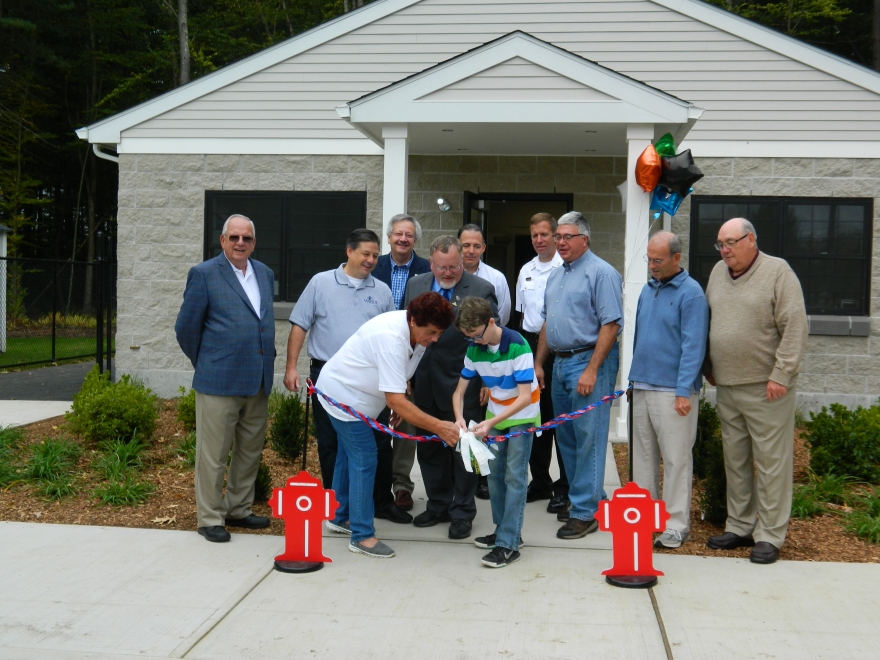 Windsor, Connecticut’s new animal shelter is a reflection of the humanity of the Windsor community. Those words of praise were shared by State Rep. David Baram during the opening ceremony held October 7. He noted too, the project came in under budget. 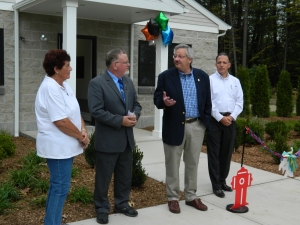 “How we treat animals is really a reflection of our society,” Baram told the crowd gathered for the event, “It is a window in to our humanity.”

Debbie Samson accepts a $550 check for the animal shelter from Joanne Verallis, on behalf of local dentist Steven Farley, an animal lover.

Mayor Donald Trinks, whose support for the project was cited as having turned the tide in its favor, said the credit should go to Debbie Samson, a founder of the non-profit “Friends of Windsor Animal Care & Control,” http://www.fowacc.org and other volunteers. They persisted, said Trinks, in appealing to local and state officials to build a new facility in town rather than pay kennel fees elsewhere, and then set out to get community backing. A one million cost was an obstacle until James Burke, town economic development director, secured a $990,000 grant for the project, added the mayor.

“Some may say ‘What’s the big deal, you’re giving them a space.’ Well – it is a big deal,” said Trinks, who humorously dubbed the day’s event “an unleashing ceremony.”

Trinks also thanked Bob Gustafson of the Windsor Public Building Commission. Gustafson, who is wrapping up thirty years of service to the PBC, visited animal shelters in other towns.

“Bob took this project on as a quest,” said Trinks, “This was a project that was going to get done.”

The cleanliness, order and amenities inside the shelter, such as a washer and dryer, were complimented by those who toured the shelter. The facility includes a dedicated cat area, an office for the animal control officer, a fenced in backyard where dogs can exercise and interact with potential adopters, and a shed for storage of pet foods and animal pantry supplies. The goal is for the animal shelter to be a stop on the road to adoption. It is off to a great start said Trinks, with all local dogs

recently in need of forever homes having been adopted.

Another milestone, Bob Gustafson  marks the completion of 30 years of service on the Windsor Public Building Commission. Shown with his wife, son and daughter-in-law.

Al Simon, wrapping up 18 years of service on the Windsor Town Council.

The parcel of land where the animal shelter was built on 970 Marshal Phelps Road was a bequest to the town of Windsor circa the 1920s-1930s. Buzz began in town about the need for a new dog pound in 2002 but getting it done wasn’t easy, noted Samson.

Windsor Town Manager Peter Souza has approved a project to build trails behind the animal shelter proposed by Ben Levesque of Boy Scout Troop 149. Next, the scout district must give a nod to the plans.

Souza has also given his approval to Ben Levesque, 16, of Boy Scout Troop 149 to build trails behind the animal shelter to enhance opportunities for the animals to get outdoors and exercise, and for potential adopters to share time with the animals. A student at Windsor High School, Levesque said he has approval from his troop leader and next needs a nod from the scout district.

A touching moment came with the delivery of a bench hand restored by Windsor resident Edward Cutler and placed outside the animal shelter in memory of the police K-9 dogs that served Windsor courageously, and have passed. Police Chief Donald Melanson and Capt. Tom Lepore helped unload the bench from Cutler’s pick-up truck. Placement of the bench was followed by the reading of a poem by Dept. Mayor Jody Terranova about the special relationships between police K-9 handlers and their partners.

“It means a great deal to the department, especially to the handlers,” LePore said of the bench.