Disrespectful Not To Take the Field During National Anthem 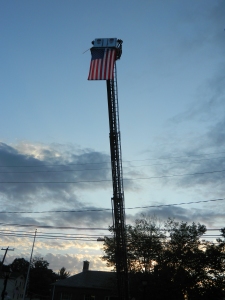 When protests during the playing of the national anthem -“The Star-Spangled Banner”- began by National Football League players a year ago, as tough as it was to see, I said – “Either one believes in the First Amendment or one does not.” I do.

Our flag has endured through actual bombardments hence the words to that beautiful anthem – “Gave proof through the night that our flag was still there …” It has endured a Revolutionary War, a Civil War, foreign conflicts and domestic unrest. In my heart I believe it will continue to endure because it represents freedom – freedom of speech, freedom of expression, freedom of religion, freedom of the press.

Pittsburgh Steeler and former Army ranger stands for anthem by himself https://t.co/edqbZtbtob #courage

Despite the rest of his team remaining off the field yesterday as the national anthem played, Pittsburgh Steelers player Alejandro Villanueva stood outside near the tunnel hand over his heart. His action is even more meaningful upon learning that his coach would have preferred “100 percent participation” in what was described as the team’s choice not to take the field.

Villanueva is a West Point graduate who played football for the Army Black Knights, reportedly he served three tours of duty in Afghanistan as a United States Army Ranger earning the Bronze Star for valor. Clearly he is a man of personal conviction, integrity and courage. Thank you Alejandro Villanueva for your service.