Immediately across the road from the highway connector that enables beachgoers to bypass downtown Westerly and head directly to Misquamicut State Beach and the Westerly Beaches, the restaurant has easy access off Airport Road. It is about three miles from the shoreline, which off-season is barely a ten minute drive but much longer during the summer when traffic is backed-up.

Best described as a “pub chain serving American fare”, regardless of their location the “99 Restaurants” where I’ve been have similar layouts – two sides for dining, a bar, soft lighting and booths of varying sizes. A nice feature is big, side-by-side booths with a middle slat that can be lifted to accommodate larger parties. Another appealing feature is the use of photos specific to the area, such as local sports teams.  There are a number of television screens positioned throughout the restaurants.

In addition to Westerly, I have tried the 99 in Auburn, Massachusetts and ones in Glastonbury and Vernon, Connecticut. The first “99” was opened in 1952 in Boston by founder Charlie Doe who passed away last year. Doe is said to have “pioneered the casual dining concept” with his “99 restaurants.”

In an online review, customer Don P. of East Longmeadow, Ma. wrote, “When you can’t think of where to eat and reasonably priced Pub Grub comes to mind then 99 is always a pretty sure bet.” 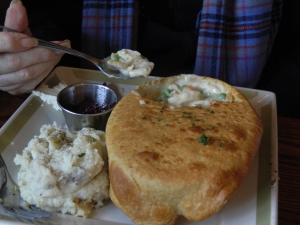 I would elevate that review to say there are some very tasty dinners on the menu. Since my original scrod, or schrod, experience at a specialty restaurant in the Boston area when I was in college, I have been ‘hooked’ on this fish. That is, when it is well-prepared.

As with any restaurant, preparation depends upon the cook or chef, as the case may be. Topped with herb-seasoned breadcrumbs and served with a lemon wedge, rice pilaf and vegetable, the schrod at “99” can be quite delicious. It is one of their best selections. Other seafood on the menu includes Fish & Chips, Fresh Balsamic Salmon or Fresh Glazed Salmon. In season they offer a cold or hot lobster roll. I have found lobster at bonafide seafood restaurants tastier but it is still nice to have a lobster option. For Chicken Pot Pie afficionados, “99” serves a humongous portion accompanied by a small container of cranberry sauce and choice of a side. Other standard American entrees are part of the menu, along with burgers, sandwiches, salads, soups and desserts.