Jan Adams, 93, has been cutting peaches for the annual Eighth Utilities District Fire Department Peach Festival in Manchester, Connecticut for 40 years. She is shown here the morning of August 27 preparing for the 67th festival held that night.

For forty years, Jan Adams, 93, has been faithfully cutting peaches for peach shortcake served at the annual peach festival held by volunteer firefighters in Manchester, Connecticut. This year was no exception. Mrs. Adams and a host of other dedicated peach cutters helped the Eighth Utilities District Fire Department mark the 67th peach festival held Saturday, August 27.

“I love it!” said Mrs. Adams, “Anything for the fire department.”

Volunteer peach cutters turned out and filled long rows of tables at the old firehouse to help with  Manchester, CT’s annual peach festival.

Her reign as peach cutter extraordinaire began when her son, Jim Adams, served as chief of the department. A member of the fire department auxiliary, Mrs. Adams has been cutting peaches for the popular festival ever since, displaying the same type of devotion that clearly motivates volunteers who suit up to fight fires in town. 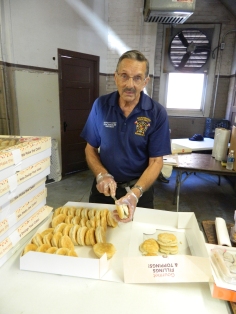 Retired Deputy Chief Robert Eschmann has logged 41 years helping with the event which typically draws some 4,000 festival-goers from Manchester and surrounding towns. Traditionally held on Friday nights, this year the festival was scheduled for Saturday night.

“That was a committee decision,” Ret. Dep. Chief Eschmann said.

Relocated across from the old firehouse.

The reason, he said, was to see if a Saturday night festival would attract even more people to the event which serves as the department’s biggest annual fundraiser. Although Connecticut is known as the ‘land of steady habits’, the move to Saturday night was not the only change this year. A few years back the festival was relocated up the hill on Main Street to the site of a newer firehouse. However, due to some needed housekeeping there, the 2016 festival was shifted back to a parking area across from the old, historic corner firehouse.

Then there was a little matter of where to get the necessary crates galore of peaches. Ret. Dep. Chief Eschmann explained that due to an earlier frost which nipped at local peaches, the firefighters were forced to go elsewhere. Fortunately, they were able to ship peaches in from New Jersey.

“Usually we get the peaches from Johnny Appleseed’s, or Lyman, or over in Rocky Hill,” he noted.

Carrying in the biscuits. 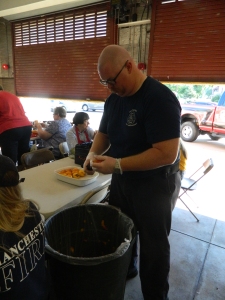 Despite the changes, organizing committee chair Danielle Cowee, a department captain, was pleased to see the community rally around the department for the morning peach cutting.

“It looks like there are more people here this year than last, ” she said.

The Garden State may have saved the day when it came to securing peaches, but locally, cream to top the peach shortcake came from Farmer’s Cow and the biscuits came from Big Y. More constants – the festival featured community spirit, entertainment, door prizes and a last, late August summertime hurrah.