Bringing us good luck in the 2016 Kentucky Derby on behalf of Danzing Candy and Nyquist , Candy and Melane (wearing her grandmother Isabel Nyquist’s hat) at WINNERS in Manchester, CT on race day 5/7/2016.

If you believe there are more than coincidences in life, read this story.

Heavily favored to win, “Nyquist” was victorious Saturday, May 7, 2016 in the 142nd Kentucky Derby, but “Danzing Candy” had hearts beating during a stretch of the 1.4 mile race when he took the lead at storied Churchill Downs. In our family it was all good because there were multiple rare connections simply not to be overlooked in this horse race, thus we took the unusual step of placing wagers at WINNERS Off Track Betting in Manchester, Connecticut.

Before the race, Melane, whose maiden name is Nyquist, displays the ticket for her mother Adelaide who made one wager on Nyquist to win.

One had to ask how often would two horses bearing names of family significance run together in the Kentucky Derby. My sister is Candy, who is known to enjoy dancing and not long ago came across a photo of her and our father dancing at a family event. My nephew Mike’s wife – Melane’s – maiden name is Nyquist. So we parlayed those connections into bets and won. We won small – but we won.

Anyone familiar with the Kentucky Derby is aware that the lovely, stylish hats worn by ladies in attendance is part of the race day ambiance. As such, Melane went successfully in search of a vintage hat which had belonged to her grandmother, Isabel Nyquist (purchased at G.Fox & Co. – which will have meaning to Connecticut readers).

More coincidences, Melane’s mom had been hoping to make a bet on Nyquist. It was good timing when Melane stopped by to show her mother my article about the race published May 5 and to say she and Mike had decided to meet my sisters and me at WINNERS to place a bet. Melane’s mom’s wager was made to WIN on Nyquist.

My sister Dixie and her son Mike prepare to make wagers in the 2016 Kentucky Derby.

“I read that ‘Danzing Candy’ was known for his speed coming out of the gate and he showed that in this race. Even though he didn’t win, it was a lot of fun, ” said Candy.

The whole experience was an adventure while as novices we took our time at the betting podium with a tremendously patient young woman who could not have been nicer. In fact, cordiality was everywhere. WINNERS is located inside what once was Shea’s American Restaurant, recently taken over by Tomato Joe’s. The co-owners greeted women who came through the door with gifts of red roses. Shea’s Grill is now on the patio in the rear, adjacent to the betting area. (That we ended up here is another interesting coincidence because prior to OTB at the site – Shea’s American is where the family gathered to celebrate Mom/Nana’s birthday in 2010.) 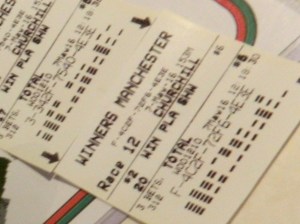 Of course Dad/Big Johnny’s name came up as Mike and I agreed, given his background which I mentioned in my previous post, raised on Sunny Crest Farm in upstate New York, Dad/Big Johnny would have studied the pedigrees and attributes of the horses.

“Big Johnny would have known the best horses,” noted Mike.

As broadcast on NBC – Nyquist is the winner of the 142nd Kentucky Derby. 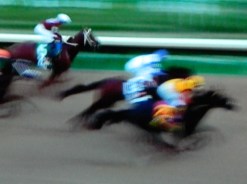 As broadcast on NBC – Danzing Candy had hearts beating for a stretch when he took the lead.

And there were other derby entrants with names to give pause. As a journalist, “Suddenbreakingnews” caught my eye and Mike added that horse into his wager mix. As well, my niece Jillian’s husband David Doyle is an executive producer in the entertainment industry; he is a past Emmys recipient and recently was once again Emmy nominated, so “Oscar Nominated” was also an attention-getter.

In yet another sign – the kind that gives one goosebumps -that there was a special family connection to this running of the Kentucky Derby, my niece Sofia unexpectedly came home Friday with an illustration she had drawn about her love of horses, not knowing about the article I had written a day earlier on the derby. I adore this illustration Sofia! When I was a little girl I too used to draw pictures of horses for my grandmother, Gram Bennett – Dad/ Big Johnny’s mother – who in her youth was an accomplished equestrian.

As broadcast on NBC -Nyquist in the Kentucky Derby Winner’s Circle wearing his congratulatory blanket of red roses.

What happens now? Undefeated to date, “Nyquist” goes on to compete in the next big race for 3-year-olds, “Preakness Stakes” in Baltimore, Maryland. If he wins there, it’s onward to Belmont Stakes in Elmont, New York. Should Nyqusit win at Belmont, he will join an elite group of Triple Crown Thoroughbred Racing winners.

(Writer’s note : Thanks to my brother John Jr. for initially calling my attention to Nyquist and Danzing Candy as 2016 Kentucky Derby competitors.)