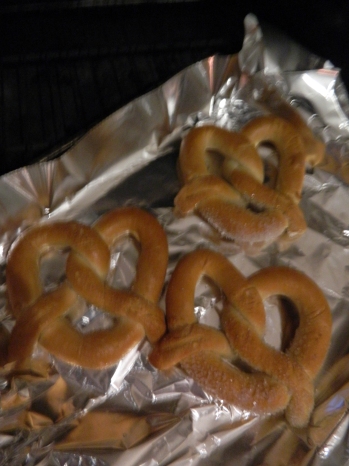 Ready for the conventional oven – 400 degrees for 3-4 minutes.

Having subscribed to the National Day Calendar e-mail newsletter, I awoke this morning to not only learn it is National Pretzel Day but to learn too the interesting history about this snack. Today is also Presidential Primary day here in Connecticut, as well as, in Delaware, Maryland, Pennsylvania and Rhode Island.

Given the “pretzel logic” – twisted reasoning which when examined does not make sense – often employed in politics, what a coincidence these primaries are being held on a day celebrating pretzels! 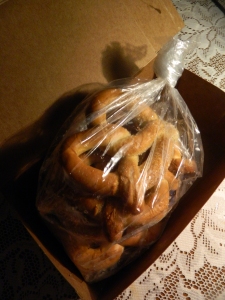 Anyway – it seems the pretzel has its origin in Christianity, according to National Day Calendar which sites the History of Science and Technology as a source, and points to an Italian monk in 610 AD inventing pretzels as a reward for children who learned their prayers. He is credited by some for having created the “strips of baked dough folded to resemble arms crossing the chest”.

In modern times pretzels have many an incarnation, including bags full of crunchy, “healthier” multi-grain varieties and salt free sold in supermarkets and convenience stores. Known to tantalize a thirst best quenched by fresh draft beer, traditional salty pretzels are still served ‘free’ in taverns.

Without question, the best tasting pretzels are 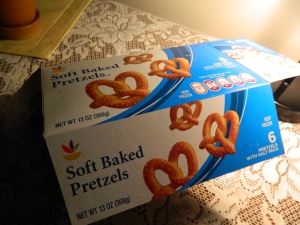 found at ballparks and hockey arenas. To qualify in this ‘best’ category they must be served soft, salt-free and warm!

Shop & Shop, nonetheless, puts out good- tasting, inexpensive “Soft Baked Pretzels”, six in a package that can be heated up in a home oven. Salt packets are separate and use is left up to personal discretion – I skip salt whenever possible. Without salt, one S&S pretzel has 160 calories, 1 gram of fat, zero percent cholesterol, 130 mg or 5 percent sodium, 34 total carbohydrate, 1 gram sugar, 5 grams protein and 10 percent iron. For a conventional oven simply preheat to 400 degrees and warm for 3-4 minutes, or in a microwave heat for 30 seconds on HIGH. Suggested toppings include cheese, mustard or salsa.

As for the pretzel logic of presidential politics, that is a subject for another piece.