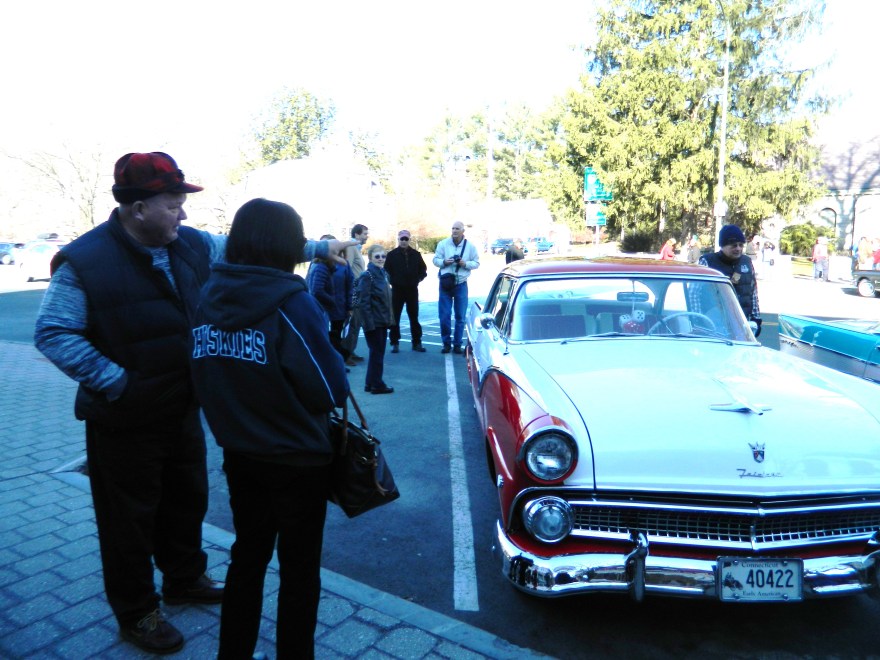 Vintage automobiles were part of “Stockbridge Main Street at Christmas” in Stockbridge, Massachusetts December 2015. The annual event recreates the Norman Rockwell illustration that thrust the Berkshires Mountains village into the national spotlight.

Nestled in the Berkshire Mountains in a New England village, the Norman Rockwell Museum can be found in Stockbridge, Massachusetts. It was here that the iconic American painter/illustrator had a studio for the last twenty-five years of his life and where the town center was the subject of one of Rockwell’s most famous works – “Stockbridge Main Street at Christmas”. The illustration, which was published on the cover of McCall’s Magazine in 1967, thrust the quaint town into the national spotlight. Rockwell died in Stockbridge in 1978, just the year before having been awarded the nation’s highest honor presented to a civilian, the Presidential Medal of Freedom. For several years now, each holiday season Stockbridge has recreated the iconic illustration, culminating with vintage cars from the 1950s and 1960s, occupying the spaces depicted in Rockwell’s piece.

Visit Stockbridge for this event and expect to see an abundance of New York licence plates. Perhaps this can be attributted to the appeal of the area as a tourist attraction and it’s easy access north along I-91 to the ‘Mass Pike’ west. It may also have to do with the strong connection felt by New Yorkers to Rockwell. After all, he was one of their own. 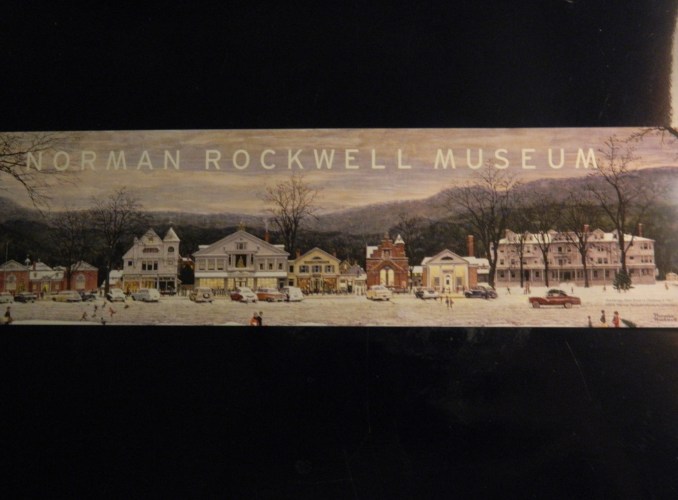 Compliments of the Norman Rockwell Museum in Stockbridge, MA. this bookmark is a reproduction of Rockwell’s iconic illustration – “Stockbridge Main Street at Christmas”. Notice the period vehicles.

Born in New York in 1894, his early years were spent in NYC with his family until they moved to New Rochelle. Rockwell was educated in New York then moved elsewhere as he built his career. Recently, a group of students from the Edward A. Reynolds West Side High School lobbied their city council to honor Rockwell by renaming the corner where he lived the first two years of life, “Norman Rockwell Place”. According to the West Side Rag, it was at the corner of West 103 Street and Amsterdam Avenue not far from Broadway, that the Rockwell family and young Norman lived in a brownstone, a site near Edwards A. Reynolds West Side HS.

A yearlong effort by the students guided by their teacher, Rene Mills – reports the West Side Rag – was punctuated by two trips from NYC to Stockbridge. That included a visit to the Norman Rockwell Museum and discussions about Rockwell’s Americana and social justice themes in collaboration with the museum’s curator of education.

Councilman Mark Levine is credited with having helped “shepherd” the proposal through and the teens were in attendance to see it happen. Noted the paper, “The students showed up to the city council meeting to watch the bill pass”. One might say, it was an American scene, reminiscent of a Norman Rockwell painting.

IT'S OFFICIAL: UWS CORNER WILL BE NAMED… https://t.co/zEJXYKIzkN