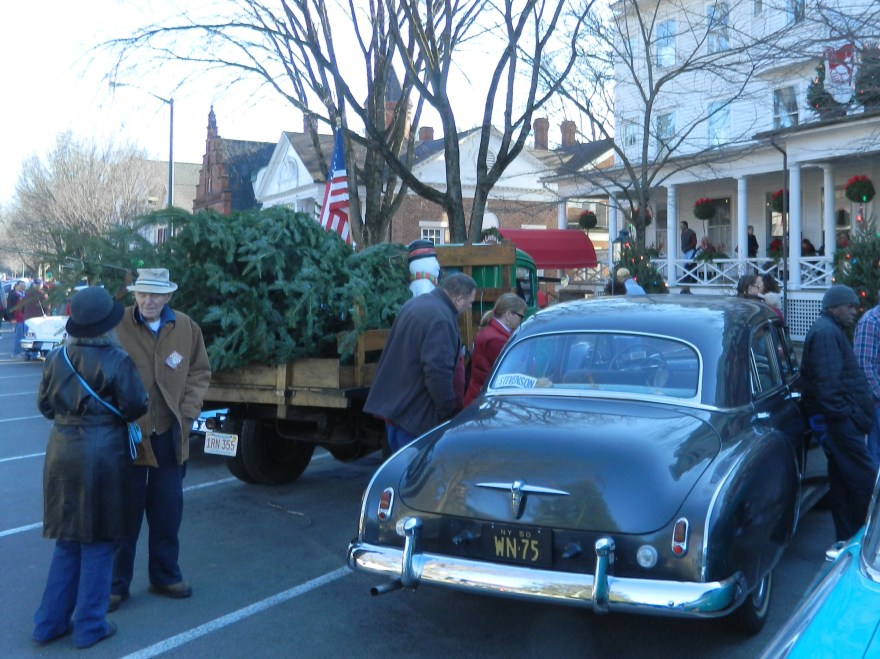 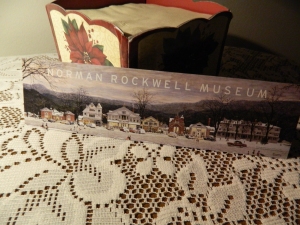 Travel the highway up into the Berkshire Mountains exiting onto secondary routes, and nestled in along the road going west from Lee is the village of Stockbridge, Massachusetts. Home to renowned American illustrator Norman Rockwell for the last 25 years of his life, Stockbridge is where he created one of his most famous works. That famous rendering depicts Main Street in Stockbridge on Christmas Eve and was published by McCall’s magazine in a 1967 special section called “Home for Christmas”.

On Sunday, December 6, the clock was turned back in Stockbridge to the 1960’s era when Rockwell painted the Christmas Eve scene. Vintage cars “strategically” lined-up in the center of town recreating the Rockwell sreetscape for the 26th annual “Main Street at Christmas the Norman Rockwell Holiday Recreation”, to benefit the Stockbridge Chamber of Commerce.

Rockwell’s depiction of Stockbridge catapulted the small town into the public eye. It was “meant to evoke the quintessential American holiday, to evoke a sense of warmth and peace … that would make people all over the country, possibly all over the world, feel as though they had come home for Christmas,” Norman Rockwell Museum curator Stephanie Plunkett told Chris Bury, when for ABC, he covered the 2009 recreation.

As seen in Rockwell’s illustration – a 1955 red Mercury with Christmas Tree on top made an appearance.

The Londontown Carolers on the front porch of the Red Lion Inn.

The illustration shows the public library, gift shops, Rockwell’s studio & home in a far corner, The Red Lion Inn and a red 1955 Mercury with a Christmas Tree on top. Making an appearance on Sunday was a red 1955 Mercury – complete with a tree.

The Red Lion Inn, which according to the museum closed for the winter at the time, is dark in Rockwell’s illustration. On Sunday however, it was vibrant. Lit for the holiday, the inn which once served as a stagecoach stop, was decorated from top to bottom while the Londontown Carolers performed on the long, front porch adorned by kissing balls that awaited couples of all ages. 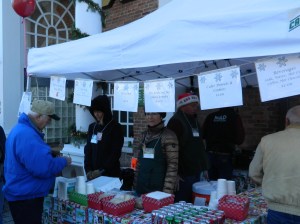 Snow covered Main Street in Rockwell’s rendering, as it typically would at this time of year. That was not the case on Sunday due to unseasonably warm temperatures hovering around 52 degrees. But as people strolled the downtown the spirit of Christmas and nostalgia for a simpler America were palpable.

AS RELATED in a biography about Rockwell put out by the Norman Rockwell Museum http://www.nrm.org/press/norman-rockwell-brief-bio/ he was born in New York City in 1894 and knew from a young age that he wanted to become an artist. He died at age 85 in 1978. Rockwell attended the New York School of Art, the National Academy of Design transferring to The Art Students League. In 1921, he and his family moved to New Rochelle, NY and by age 22 he had painted his first cover for the Saturday Evening Post. It took him some 10 years to finish the Stockbridge Main Street painting.”Without thinking too much about it in specific terms, I was showing the America I knew and observed to others who might not have noticed,” Rockwell was quoted as saying. He married a schoolteacher in 1930, they had three sons. Rockwell moved to Vermont then in 1953 to Stockbridge. After the loss of his first wife, he remarried, another schoolteacher. In addition to his popular holiday Saturday Evening Post covers, among Rockwell’s most beloved illustrations are the Four Freedoms said to have been inspired by a speech delivered by President Franklin D. Roosevelt to Congress in 1943 – Freedom of Speech, Freedom to Worship, Freedom from Want and Freedom from Fear.

Stockbridge Main Street at Christmas ran December 4-6. The event featured Tales of Christmas at a local church on Friday, house tours, story time, a caroling luminaria walk and a holiday concert on Saturday, and the recreation on Sunday. Go to STOCKBRIDGECHAMBER.ORG for more information.