What better location for two big-hearted men, the NFL”s Chris Baker and Mayor Donald Trinks, to team up and promote a meaningful cause then at a spot with a special place in the hearts of the community – Bart’s Drive-In Restaurant in their beloved hometown of Windsor, Connecticut.

Baker, a defensive lineman for the Washington Redskins, #92, returned to Windsor and to Bart’s July 10, for a second year after launching the non-profit Chris Baker 92 Foundation in 2014 – http://www.chrisbaker92.com. He launched his foundation with a mission to “engage and mentor boys and girls” in a literacy program, football camps and a mentorship program.

Jerome Strums and Chris Baker. friends since the 3rd grade and former teammates on WHS Football.

“Everybody appreciates that Chris comes home. For him to return to his old neighborhood having achieved a dream, it shows them (the kids there) that they can do it,” said Jerome Strums, a childhood friend who played football with Baker at Windsor High School.

It was a busy weekend for Baker who hosted a football camp with other NFL players and guest coaches at Jack O’Brien Stadium including Frank Kearse, Terrance Knighton, Silas Redd and Barry Cofield. From Bart’s, Baker was headed next to Goslee Pool in town where the NFL Fuel Up truck was to greet 150 underprivileged youngsters who were to be treated to ice cream. 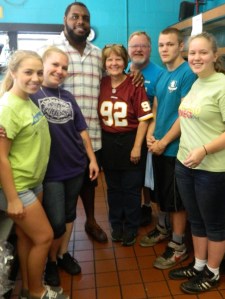 “I want them to know I’m there for them,” said Baker, referring to the young people in Windsor and the Greater Hartford area.

Openly acknowledging that he got into some trouble in college, reportedly two off-campus fights while at Penn State, Baker transferred to Hampton University in Virginia. He is quick to add he turned his life around with the help of his faith in God, and emphasized he wants kids to realize choices have consequences.

Chris and his father, Marion Baker, pray together daily by phone.

“The consequences of running to trouble rather than away,” he said.

Recently married to Jamila in March, he prays everyday by phone with his father, Marion Baker, who still lives in Windsor and stopped by Bart’s.

Of his son’s success Marion Baker said, “It’s overwhelming at times. It’s a joy to see him come back to the community. I’m very proud.”

“We pray together everyday (by phone). I text him and I tell him I love him,” he added.

Participation in this year’s football camp increased to 250 children, according to Chris Baker. In addition to Windsor, his literacy program is in place in an elementary school in Washington D.C. near the Redskins’ home stadium. In one year he noted, reading results there improved by 10 percent. With that in mind, Baker had an appointment set-up with Craig Cook, Windsor’s superintendent of schools to discuss establishing and implementing Baker’s literacy program in Windsor schools. Another objective for Baker is to put his literacy program in the Hartford schools.

Chris Baker autographs a photo for Brendan Jenkins, 10, a student at Clover Street School in Windsor, CT where he plays football for the Windsor Giants.

The atmosphere at Bart’s on Friday was light and fun-filled. What else could be expected thanks to the presence of Baker who was nicknamed “Swaggy” by a friend when they were kids because of his playful personality. It’s a name that stuck. Bart’s even put “Swaggy Dogs” on the menu – which as he did last year- Chris grilled up for customers. 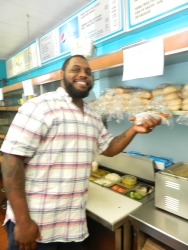 A “Swaggy Dog” made by Chris Baker.

Nonetheless, make no mistake about it, Baker has a seriousness of purpose about the goals of his foundation which also include establishing guidance and assistance to high school students through a mentorship program. In addition to establishing the Chris Baker 92 Foundation, to benefit Greater Hartford and Washington D.C., in the D.C. area Baker has been involved with the Boys & Girls Club and the American Heart Association.

Carol Engelmann, owner of The Beanery and a loyal Redskins fan shown with #92 himself defensive lineman Chris Baker.

Baker’s devotion to community service aligns with Trinks’ personal philosophy he noted, and a fine tradition begun by Bart’s original owners, the Dillon Family. That tradition is being carried on by Trinks and Carol Engelmann, owner of the adjacent Beanery Restaurant and a loyal Redskins fan.

Baker graciously signed autographs and posed for pictures at Bart’s … 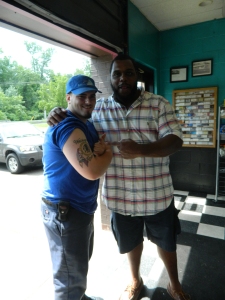 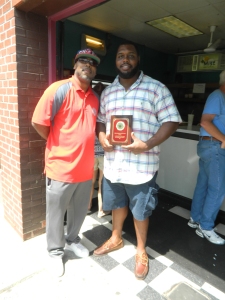 Pete Higgins and Kevin Kirksey co-founded the Greater Hartford Pro-Am, which presented Chris Baker with a plaque for sponsoring a team.

After a canoe ride on the Farmington River with their moms, Maya Donzella, Taylor Krapalis, Casey Krapalis and Hannah Donzella, all of Windsor, met Chris Baker.

Chris Baker shown with his cousin Toneea Baker, who also grew up in Windsor, Ct and is currently studying public relations at Morgan State College in Baltimore.