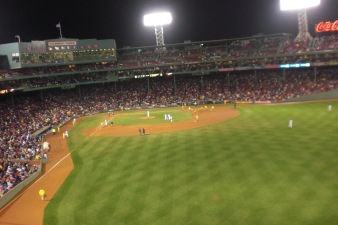 The first query was a poll question posed last night on the New England Sports Network coverage of the Boston Red Sox/Toronto Blue Jays match-up that took a pitiful turn for Sox fans such as myself. As I sat watching the game on the television screen and wishing I was at Fenway Park to enjoy an evening prelude to summer, the BoSox went from a strong lead to a 13-10 loss. YIKES! Another of this season’s aptly described “free falls”.

During the broadcast an interactive poll was put forth about MLB season length. On the one hand, it was noted, a shorter regular season would allow teams to start later in April and hopefully avoid the bad weather – including cold temperatures and even snow that persisted this year. On the other hand, the change could mess with existing records.

With efforts underway to make MLB “more marketable”, stepping up the pace of the game has been a priority. According to ESPN.com games averaged three hours and two minutes in 2014. As someone who has logged innumerable hours on bleachers watching family members play Little League then American Legion baseball – including weekend double-headers – and who spent many chilly, early spring afternoons wrapped in a parka watching our high school team, then cheered on the UConn team (I even got belted on my right arm with a errant fly ball off home plate down at Dodd Stadium a few years back and left with a welt to prove it), and as one who loves sitting in the stands at Fenway – I’m not sure how I feel about the changes.

Given the fact that some records are on the books based on a 154 game season, elongated in 1961 by the America League, the MLB commissioner was quoted by ESPN.com as saying he would consider rolling back the regular season from the current 162 games to 154. However, he added, stripping it down to 110 games is not on his radar.

“I don’t think it would be impossible to go back to 154 games,” said Rob Manfred.

About all I can say at the moment is – that’s eight fewer games to have an opportunity to try to get tickets, which is already a competitive sport unto itself.

As far as the American League East last place Red Sox that got booed at Fenway last night, manager John Farrell is asking fans not to count them out.

“I wouldn’t write the team off,” he said.