All for the Patriots!  Dixie, Candy, Mike, Melane and me  – behind us a mound of snow, of course. Outside Sadler’s Ordinary in Marlborough, CT where we kicked off Super Bowl Sunday with a “Go Pats!” breakfast.

When the camera panned from a night view of Boston, Massachusetts to one of Seattle, Washington during the opening of the Super Bowl last evening as John Legend sang the lyrics “from sea to shining sea” in “America the Beautiful”, it really struck a chord. Super Bowl XLIX was especially exciting in my family with those of us living in New England as stalwart Patriots fans and my Seattle relatives huge Seahawks fans. No matter what, I thought to myself, our family was going to win because as the beautiful lyric goes – “from sea to shining sea” – we had it covered.

If both teams could have won, I would have been pleased. That said, since only one could bring home the trophy, I am ecstatic it is my New England Patriots – led by our outstanding quarterback, Tom Brady, chosen Chevrolet MVP of the game.

Meanwhile, Sofia and Deb cheered for the Seahawks out in Washington state.

“Unbelievable! They fought to the end, they never gave up. They deserved to win,” Mike said by phone after the Patriots sealed a 28-24 victory on an interception by undrafted rookie Malcolm Butler.

“You know what team Butler is going to be playing for next season – the Patriots,” added Mike.

Shortly after the win , my phone started ringing – “we won!” Then, I could hardly wait to make my call to Mike and Melane – “we won!”

Tom Brady was brilliant. Depite being intercepted twice he displayed his characteristic cool under pressure and the kind of determination that has brought the Pats to the Super Bowl six times in what is called the “Brady-Belichick Era” – referring to Coach Bill Belichick –  and earned Brady his fourth Super Bowl ring at the University of Phoenix Stadium in Glendale, Arizona.

“We are all ‘Patriots’,” team owner Robert Kraft said after the Pats victory.

Nonetheless, it was a nail-biter. Although the Pats dominated early on scoring two touchdowns in the second quarter, the Seahawks and their quarterback Russell Wilson answered in the same quarter with two touchdowns sending the teams into halftime with a tied score of 14-14. The third quarter looked dim for the Patriots with Seattle scoring another 10 points.

Yet, as New England fans know – never count Tom Brady out. In the fourth quarter the Pats came back with 14 points – the last of them scored within the final minutes of the bout. Enough time was left on the clock to return the football to the Hawks and with mere seconds on the clock – excruciatingly long seconds – the Seahawks made it to the one yard line. Then hail Butler – the interception! 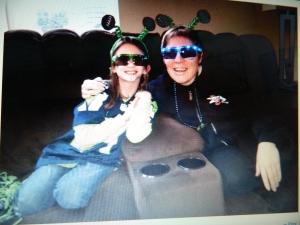 Sofia and Katie in their Seahawks gear.

Nate, Wayne, Sofia and Dan root on the Seahawks.

“I just had a vision that I was going to make a big play and it came true,” the emotional young man told a reporter after the game.

“Malcolm, what a play,” said Brady, “I mean, for a rookie to make a play like that in a Super Bowl and win us the game, it was unbelievable.”

This win was a sweet one for all the usual reasons, but even more so because of the cloud that was cast over the Patriots after their AFC championship win when allegations arose that the team used deflated footballs to gain an edge in that contest. The matter is under investigation by the National Football League but many jumped to conclusions and were quick to indict Brady and Belichick without evidence. Team owner Robert Kraft has not only stood by Brady and Belichick but put the NFL on notice to produce evidence or apologize.

“It didn’t matter how much air was in the footballs, Brady was unstoppable when the pressure was the strongest” Rob Maaddi wrote in an Asscociated Press article.

Love these Patriots hats – a gift from Mike to each of us. Thanks Mike.

As well, there have also been former quarterbacks such as the one time Redskins standout, Joe Theismann, who said the ball pressure simply would not matter.

Regardless, Brady and Belichick have been put through it. They emerged on the high end.